At their Geforce Gaming Celebration before Gamescom 2018, Nvidia announced that a total of 21 games would support Nvidia's RTX technologies, a feature that was almost exclusively marketed as Ray Tracing support at the show, with examples like Battlefield V, Metro Exodus, Atomic Heart and Assetto Corsa: Competizione all featuring support for real-time Ray Tracing.

Now that the dust has settled a little, Nvidia has released a press release to confirm that RTX technology refers to both AI and Ray Tracing, which means that almost half of the "RTX Games" below will lack any support for Ray Tracing. In fact, more of the titles below support Nvidia's AI-driven DLSS (Deep Learning Super Sampling) than real-time Ray Tracing, with 16 games supporting DLSS while 11 support Ray Traced elements.

Below is a list of all the games below that will support Real-Time Ray Tracing; 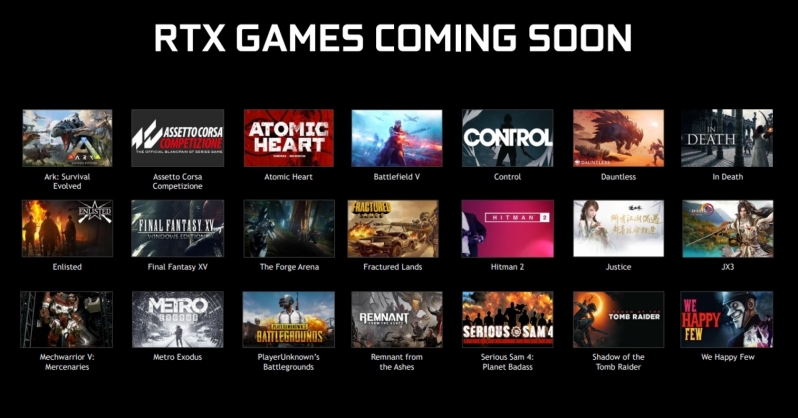 Nvidia's DLSS (Deep Learning Super Sampling) technology is designed to render sharp images with smooth edges through the use of Turing's Tensor Cores. Nvidia's name for the technology suggests that it offers image quality improvements that are similar to supersampling.

Below is a list of games that will support Nvidia DLSS;


Remember that RTX support in games does not guarantee support for Ray Tracing. RTX is a catch-all term for both Nvidia Ray Tracing and AI technologies, which means that RTX-enabled games need not feature Ray Tracing at all.

You can join the discussion on Nvidia's clarification regarding RTX support in games on the OC3D Forums.

TheF34RChannel
Yet it's called 'GeForce RTX' and they tried to ram RT down our throats. No mention of this during the million year keynote...Quote
Reply