Nvidia's Deep Learning Super Sampling (DLSS) technology is perhaps the biggest innovation that is included within the company's RTX series of Turing graphics card lineup, at least outside of Ray Tracing acceleration.

So far Nvidia has announced that sixteen games will support the company's DLSS technology, but now we can add nine more games to the list, which include Devolver Digital's SCUM, Overkill's The Walking Dead and Ninja Theory's Hellblade Senua's Sacrifice. All titles that are new to this list will have "Newly Added" listed beside the game's name. No games support DLSS at the time of writing, the titles listed below have agreed to support DLSS, with launch games adding support via future patches/updates.

Nvidia's performance data below showcases the performance benefits of DLSS, which allows Nvidia's RTX 2080 to offer a 2x performance boost over the company's GTX 1080 in four of six DLSS enabled test cases. This feature enables Nvidia to offer increased game performance without the need for improved computational capabilities, thanks to the AI performance that is provided by Nvidia's Tensor cores.

RTX enabled games can offer support for Ray Tracing, DLSS or both, with the following games planning to provide support for real-time Ray Tracing in the future. 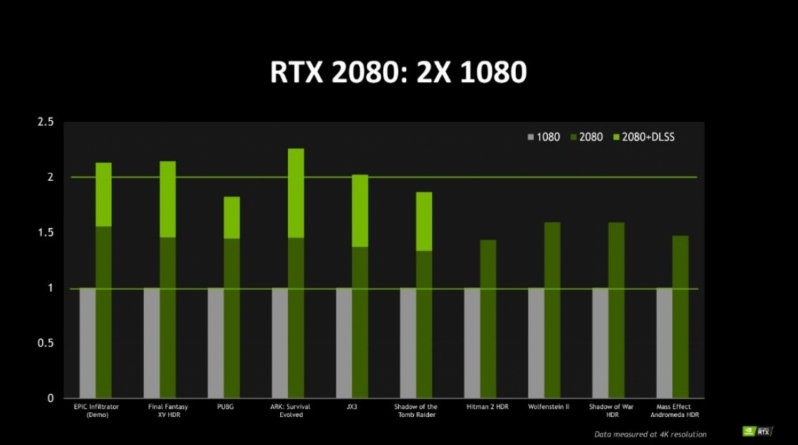 Nvidia's list of DLSS supported games will only grow over time, offering Nvidia a killer performance advantage to flaunt over their competition. Only Nvidia RTX series graphic cards can support DLSS at this time, thanks to the inclusion of Tensor cores within the company's Turing architecture.

You can join the discussion on Nvidia's DLSS technology gaining momentum on the OC3D Forums.