A Sharpness slider has also been added to the game

Nvidia's performance-boosting DLSS technology is due to arrive within Monster Hunter World on July 17th, delivering performance improvements of up to 50% if Nvidia's internal testing is to be believed.

At this time it is unknown how DLSS will impact the image quality of Monster Hunter World, but Nvidia plans to tackle their usual "blurry" criticisms by bringing a sharpness slide to the game. This will enable gamers to play Monster Hunter World with softer or sharper graphics based on their preferences.

Given Monster Hunter World's standard performance profile, it is hard to argue that DLSS won't offer users of high-resolution screens huge increases in framerate and overall smoothness during gameplay. Even so, DLSS is known to offer what could be considered inferior graphics to a native resolution rendering. 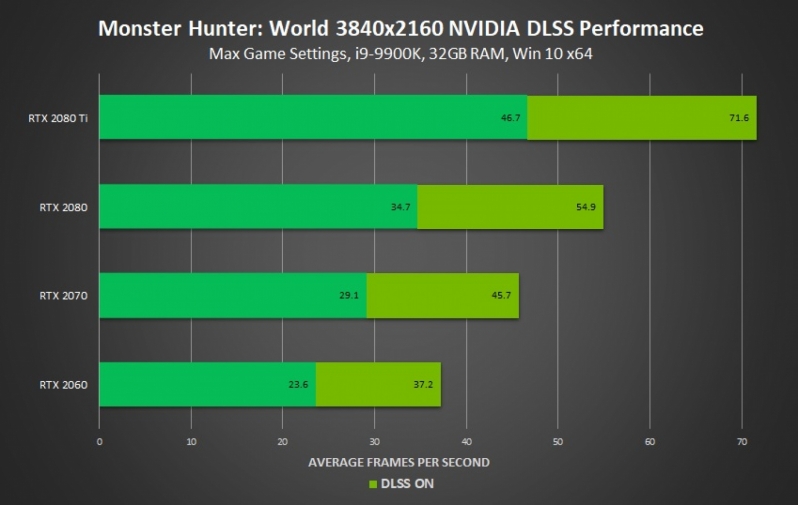 We plan to analyse DLSS within Monster Hunter World when the game is patched on July 17th, so expect to hear more about Monster Hunter's graphics and RTX performance in the near future.

You can join the discussion on Nvidia's promise of up to 50% more performance in Monster Hunter World on the OC3D Forums.

NeverBackDown
Is it also 50% blurrier?

spolsh
Don't be silly - Nvidia give you value - a full 100% blurrier.Quote

NeverBackDown
Oh! you know you're right!

Except they missed because you can't aim well while DLSS is on.Quote