Wolfenstein II is a strange use case for this feature, as none of Nvidia's current Turing offerings has any trouble running the game at 4K with 60+ FPS framerates, making NAS useless for the most part. In most cases, HardwareLuxx has reported that they could not find any graphical differences in the game for the most part, though they have reported strange artefacts in some locations. 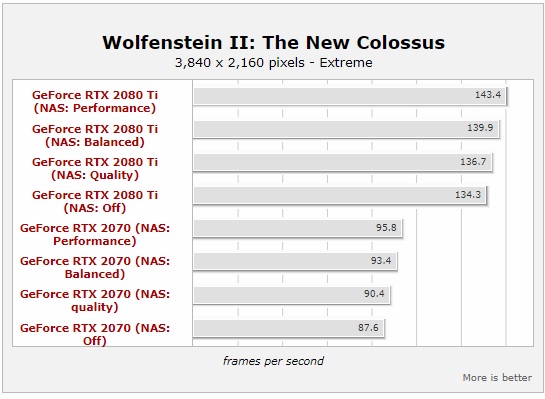 While the performance gains that are offered with NAS are minimal, it is hard not to be impressed with the feature, enabling higher framerates with a dip in graphical quality that is designed to be unnoticeable. In time we will see if similar artefacts are presented in future NAS enabled games, or if this bug will be ironed out with a new Wolfenstein patch.

You can join the discussion on the performance impact of Nvidia Adaptive Shading on Wolfenstein II on the OC3D Forums.

Peace Đ
7% doesn't sound that much, but that's only because the FPS are already so high. Imho, the fact that those 7% translate to 9 FPS is a pretty awesome leap, especially for owners of 144Hz monitors.Quote

AlienALX
Boosting the performance of this game kinda reminds me of a laxative. It will just make the poo come out faster

I do like these new ideas though. Nvidia has designed some really cool features over the years that mostly go unnoticed which is a bit of a shame. Their driver team should get a lot more credit than they do.Quote

Bartacus
Quote:
ROFL!! You are not kidding. I cannot believe I paid for this game, only to ditch it after the first non-skippable 5-minute dramatic cut scene.Quote

Peace Đ
Quote:
Why are you playing a singleplayer game, when you want to skip the cut scenes?

looz
If he's anything like me, he just launches a game like Wolfenstein to kill some nazis immediately.Quote
Reply