Certain publications are spreading a lot of false information

Pre-order bonuses are not new, coming with most games from major developers to provide game purchasers with a reason to pre-order an upcoming game. While this tactic is not consumer friendly, as it forces some consumers to purchase a game before it can be reviewed or critiqued by journalists or otherwise prove itself to third parties.
It is popular to be critical of pre-order exclusive items, but sometimes articles on this subject can over overboard and even go as far as presenting false information about the content in question. In this case, we will be talking about Need for Speed: Payback, who's "Platinum Car Pack" has received a lot of backlash recently for its "Exclusive Tyre Smoke" effect.
The below image was spotted by Techpowerup on the website of the Australian games retailer EBGames, leading them to claim that the game offered pre-order "exclusive graphics effects [that are] not found on copies bought after its release". This is simply false information, something that could easily be disproven with a mere Google search and a minutes worth of research, you could even go so far as to call this conclusion clickbait.

What the "Platinum Car Pack" offers is offered with pre-orders of Need for Speed: Payback's Standard and Deluxe Editions, offering users five uniquely modified and customised/tuned cars that all also feature an exclusive "Platinum Tyre smoke" colour. Effectively this is a selection of cars that are otherwise available in the game that comes pre-tuned with a custom skin, this DLC is not offering an "exclusive graphics effect"

The EBGames listing that TPU sources also states that the "Platinum Blue Tire Smoke exclusive to Platinum Car Pack vehicles", not listing it as a graphical option but a unique modification for pre-order exclusive vehicles. For all we know, here tyre smoke colour will be a modification option for all vehicles, as plenty of games have done this before. 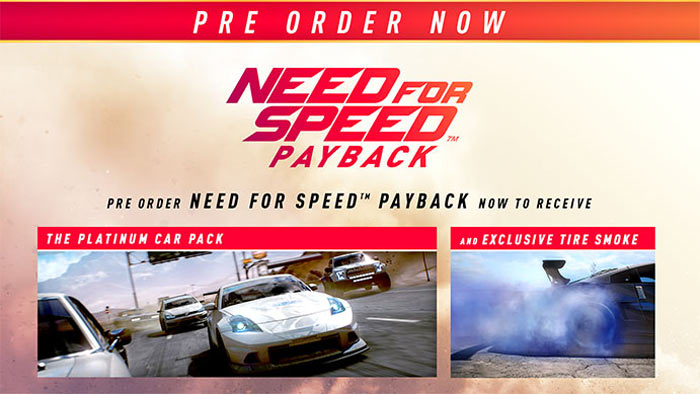 We will not defend EA's decision to offer Pre-order exclusive DLC with this game, but the allegations that have been made by certain publications are downright false.

Hexus has also come out and made this seem like a slippery slope where an "endless" number of graphical effects could be put behind a pre-order exclusivity paywall in the future. Thankfully Hexus has used an iota of common sense in their article, hoping that the "exclusivity will just be centred on the tire smoke blue colour" and not around a unique graphical option.

Even looking back on available gameplay for Need for Speed: Payback we can see normal tyre smoke within the game, making these allegations of an "exclusive graphics effect" pretty meaningless.

You can join the discussion on Need for Speed: Payback's Pre-order "Exclusive Tyre Smoke" on the OC3D Forums.

Damien c
People are to eager to rush out an article hoping for those clicks, regardless of whether the information is correct or not.

I don't like Pre-Order bonuses but I do understand why some people do because sometimes they do offer some, cool stuff if you pre-order the game but that stuff alone won't get me to pre-order a game.Quote