128 threads on a desktop processor. Wow.

Alongside this announcement, MSI officially revealed a range of new TRX40 series motherboards, including its Creator TRX40. Within a video for this motherboard, MSI accidentally announced AMD's plans for its TRX40 platform by showing Windows 10's task manager with 128 active threads. That means that AMD has a 64-core Threadripper processor on the way.

AMD has teased that its TRX40 platform is scalable, but they didn't announce that it was scalable to high core counts than its 32-core Threadripper 3970X. That said, AMD's last-generation Threadripper flagship was the Ryzen Threadripper 2990WX, making it possible that a 3990X/3990WX is on the horizon.

MSI has since removed and re-uploaded the video which included the 128-thread image below. This image was quickly captured by WccfTech. 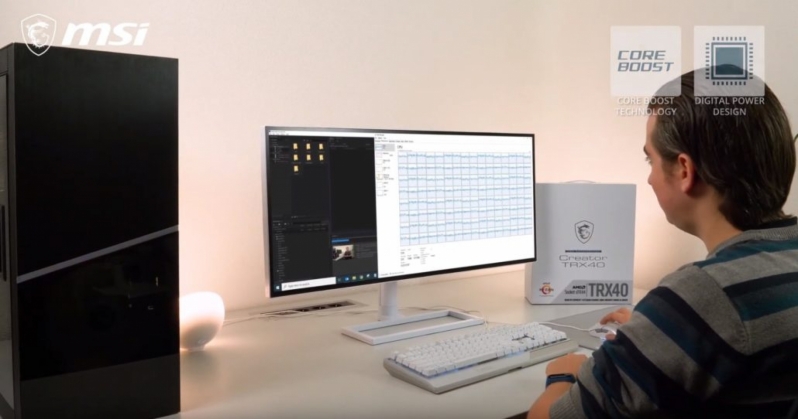 Below is MSI's edited video for its AMD Ryzen Threadripper TRX40 Creation motherboard. The video contains no mention of core counts anymore.

Read more of MSI's accidental reveal of a 128-thread AMD Threadripper processor on the OC3D Forums.

Giggyolly
I'm sure 64 core TR exists, I mean that's obvious. But whether AMD decide to release it is an entirely different question.
They need as much supply as possible to win the enterprise market, so why sell the chips for less on HEDT.Quote

WYP
Quote:
When AMD is leaving the 3980X and 3990X names vacant, we can be sure that bigger CPUs are coming.

When last gen had a 2990WX, why does this gen not have a 3990X? In their call, AMD also kept mentioning scalability, which also implies more cores are to come.Quote

Dicehunter
Tired of all these lies in the industry, Nothing is ever "accidentally leaked" or people would be taken to court and sued for thousands, It's all done on purpose.Quote

Dark NighT
I'm with Dice on this one, this doesn't seem accidental at all, if a company is serious about NDA's they would not release this accidental thing, AMD would have their heads on a platter for it.Quote

WYP
The old rumours regarding this threadripper launch did include 64-core teasers. The likely thing is that MSI forgot to re-edit the video when they were told that was no longer happening.

I know what was said to the press during AMD's briefing, nothing was said regarding higher core counts. There was only references to scalability when it came to TRX40.

Yes, there are definitely leaks that are intentional, but this one has the hallmarks of a mistake. It looks like AMD delayed their reveal and MSI didn't change everything they needed to.

My thoughts, AMD didn't want to be seen increasing prices too much. They are launching a 32-core with a $1999 price tag, which isn't that much higher than the $1799 cost of its predecessor given the advantages of Ryzen 3rd Gen.

Wait until Q1 2020, AMD can start 2020 strong with higher core counts and increase pricing without as much blowback. People will be used to the 32-core costing $2000 by then. It also gives AMD a strong Computex.Quote
Reply