The release date and PC system requirements of Monster Hunter World were published yesterday, though so far a lot of PC-specific information about the game remains unknown.

In a Q&A session with PC Gamer, Capcom confirmed that the game would have visual "parity with console versions", preventing the game's PC version to offer a visual leap outside of resolution and framerate options.

Capcom has also stated that they have no plans to implement cross-platform multiplayer in Monster Hunter World, making the game's PC/Steam version a standalone experience.

PC Gamer also had the opportunity to have a look at Monster Hunter: World's graphical options menu, allowing them to see how much the game can be tweaked on the PC platform, though sadly some of these options have vague names and provides players with very little indication of what these options do within the game. 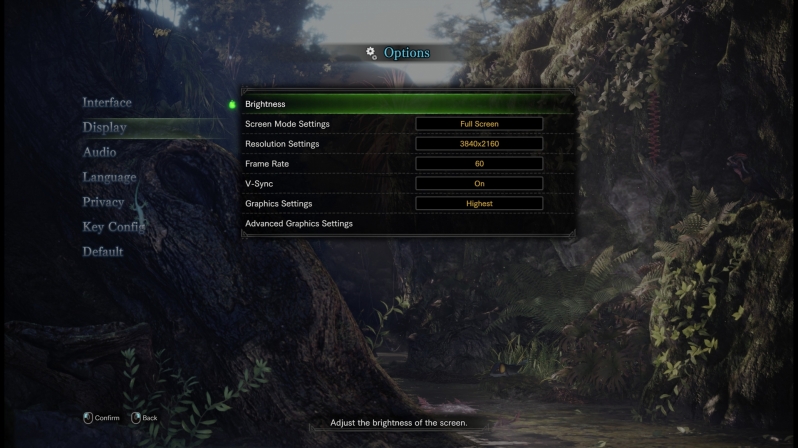 One of the first issues that we have with this graphical options menu is that "Resolution Scaling" isn't defined as a percentage value, giving PC players no indication of whether or not the game is running at their display's native resolution. This vagueness is unnecessary, and Capcom should adjust the naming of this option before Monster Hunter: World's PC release.

We would also like to see more descriptive text for each option at the base of the screen, as this information can be vital when it comes to implementing changes within the game. Information like each setting's CPU, GPU or memory bandwidth impact will be beneficial for PC users with older systems, and for those that enjoy fine-tuning their graphical settings for optimal playability.

Additional descriptive text will be extremely useful for settings such as LOD Bias, Z-pre-pass and Mesh LOD Level Bias, as most PC gamers won't fully understand what each of these settings does, or their performance impact. 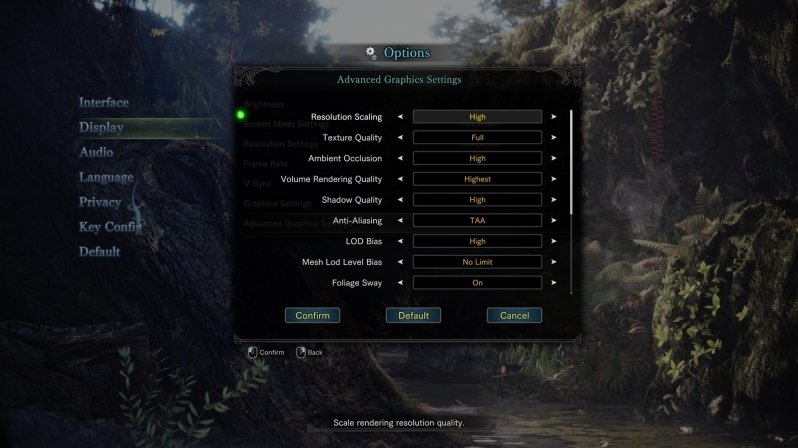 It is encouraging to see the PC version of Monster Hunter World include a wide range of variables for fine-tuned game adjustment, especially after seeing such lacklustre graphical options menus in the Crash Bandicoot N. Sane Trilogy and Dark Souls: Remastered. Our performance overviews for these titles are available here (Crash Bandicoot N. Sane Trilogy) and here (Dark Souls: Remastered). 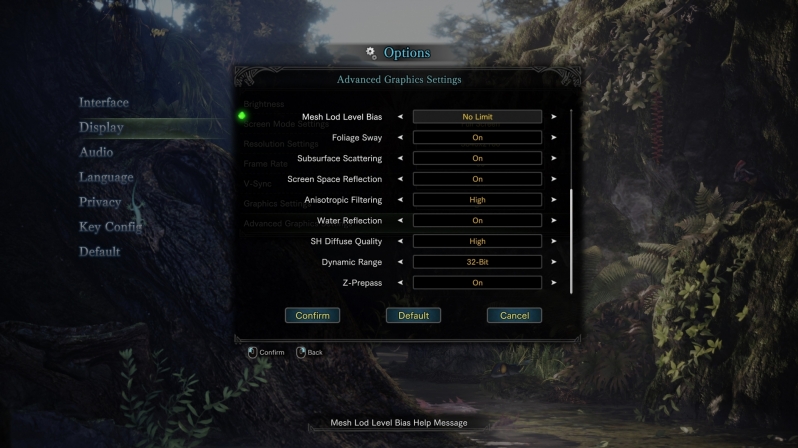 Capcom has confirmed that they are "considering" a free update for the game post-launch to deliver enhanced visuals on PC, perhaps adding higher resolution textures, HDR support or options for improved shadows, lighting or Ambient Occlusion.

You can join the discussion on Monster Hunter: World's PC graphical options on the OC3D Forums.

Dicehunter
I don't really have a problem with it having parity with consoles as long as they actually do work on optimisation so it doesn't take something that's 5 times more powerful than a console to get equal performance.Quote

Dicehunter
The price on Steam is a little nuts, £49.99 for a straight port from the consoles, The devs must be smoking something.

Apparently the devs have put extra graphical features into the PC version, Textures and Fx are much sharper.

Warchild
Quote:
Same as Crew 2. Ultimate version is about 90euros...

Worst thing about that (I got it free with my card) was that it seems like they forgot to add a "quit game" feature in the main menu system, so they added it as an afterthought via the button "Y" for those using a controller.

And the horrendous voice acting in that.. good god, it felt like an early 90s arcade game from Japan. Like house of the dead 2. How this game went from the Crew 1 to this is too complex to imagine for me. 60 fps lock wasnt so bad though, graphically the game is ok. Sound effects could have been better though. Would have been nice to hear changes in turbo drop valves etc as you upgrade the part.Quote

Dicehunter
Quote:
Played Crew 1 for all of 2 hours, Never touched it after that, Really not my type of game, Way too arcadey.Quote
Reply