Microtransactions 'risked undermining the heart of our game'

Middle Earth: Shadow of War has been mired in controversy due to the game's use of microtransactions, taking a lot of ire from fans due to the primarily single-player nature of the game.

While the game has been reviewed positively by most players, the game's closing act "Shadow Wars" has proven highly controversial thanks to the challenge it presents and how purchasing Orcs can simplify the experience. In this case, many players felt that they were being forced to spend money on the game, while others felt that purchasing Orcs undermined the nemesis system, one of the highlights of the series.

Monolith has been taking note of player feedback since Shadow of War's Launch in October, revealing plans to permanently remove Gold, War Chests and the Market from Shadow of War. Gold purchases will cease on May 8th, and War Chests and the in-game market will be removed on July 17th, where Monolith plans to release free updates to the game which will improve the final section of the game and add new narrative elements fo the title.

This planned update will undoubtedly improve Shadow of War's overall gameplay experience, not only by taking away controversial content but adding new elements with will offer gamers a potential reason to replay or purchase the title for the first time. This announcement comes shortly after the removal of progression-based microtransactions from Star Wars: Battlefront II.

Below is a portion of Monolith's official announcement revealing their free July 17th update and their reasoning behind their planned removal of microtransactions.

The core promise of the Nemesis System is the ability to build relationships with your personal allies and enemies in a dynamic open world. While purchasing Orcs in the Market is more immediate and provides additional player options, we have come to realize that providing this choice risked undermining the heart of our game, the Nemesis System. It allows you to miss out on the awesome player stories you would have otherwise created, and it compromises those same stories even if you don’t buy anything.

Simply being aware that they are available for purchase reduces the immersion in the world and takes away from the challenge of building your personal army and your fortresses. In order to fully restore the core promise of the Nemesis System, we’ll be permanently removing Gold, War Chests and the Market from Shadow of War. This means the option to purchase Gold with real-world money and the ability to gain Orc Followers from War Chests will be removed. There will be a specific amount of time given for players to utilize their unused Gold. If players have unused Gold by the end of the time allotted to spend it, any remaining Gold will be converted to in-game items.

Additionally, we’ll be updating the Shadow Wars section of the campaign, where players defend their fortresses against Sauron’s repeated counter-attacks. This portion of the game will be improved with new narrative elements and streamlined for a more cohesive experience. For players who choose to continue with these on-going fortress defense missions, the Endless Siege update released last November will still be available. We’ll also be incorporating many other gameplay improvements that will be detailed in future build notes, including Nemesis System updates, new player skins, skill tree additions, gear system upgrades and progression updates, just to name a few that we’re excited about. 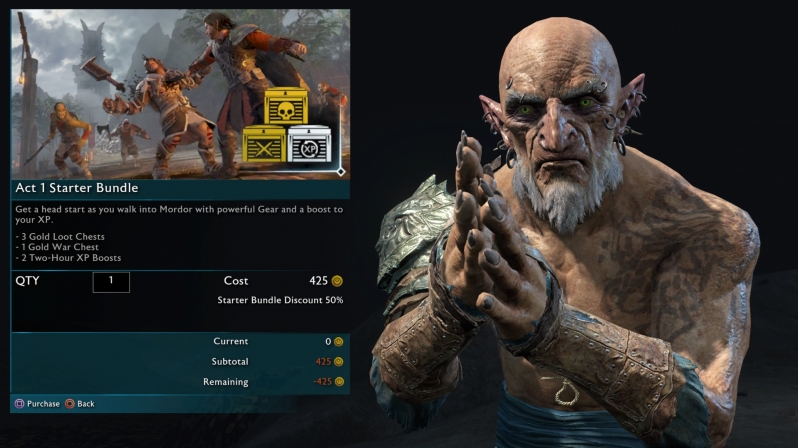 With this update, Monolith has confirmed that players will be able to recruit Orcs in Online Conquest and Vendetta missions and that more legendary Orcs will be present in the game. This change will make the acquisition of Orcs a lot easier, accounting for the lack of Orcs from loot crates or microtransactions.

You can join the discussion on Monolith's plans to remove microtransactions form Middle Earth: Shadow of War on the OC3D Forums.

Linchpin
They deliberately made the latter stages of the campaign a grind to try to drive people to buy the microtransactions. It's really next level corporate apologism to try to claim "it made no difference".Quote

NeverBackDown
Then you didn't play the game and are just on the hatewagon.Quote

Linchpin
Quote:
No I'm just not in denial like you are. There's not yet been a lousy business practice invented that you didn't love and loyally defend.Quote

ImprovizoR
Quote:
This is something that's been widely reported by both reviewers and users. So don't. Just don't.Quote
Reply