Microsoft may be bringing Xbox One Game Compatibility to Windows

An official Xbox One Emulator on Windows 10?

Microsoft may be bringing Xbox One Games Compatibility to Windows

Microsoft's Xbox Platform has been growing closer to Windows/PC for quite some time, with the Xbox Play Anywhere programme bringing all new first-party Xbox games to PC with support for cross-saves and other cross-platform features. Now it looks like Microsoft plans to bring Xbox One even closer to PC, so much so that it's possible that full Xbox One game compatibility may be coming to Windows 10.

With Windows 10 build 18334, some Windows 10 Insiders are gaining access to State of Decay, a game that will be available to play for free for a limited time. Sadly, Microsoft didn't reveal much more information, but after some digging by Thurrott, it appears as if Windows 10 is getting some form of Xbox One game/support.

Strangely, Microsoft's copy of State of Decay appears to come from Xbox servers, rather than the Windows 10 Store, and use the .xvc format, which is designed specifically for Xbox One. Furthermore, this new file format can now be installed by Windows. It appears as if Windows 10 is gaining support for a lot of Xbox One's unique file formats, opening the door for some form of console emulation on PC.

Microsoft is clearly trying to bring Xbox One and PC closer, with keyboard/mouse support arriving on Xbox One while PC is seemingly gaining support for Xbox One's unique file formats. This could just be a way for Microsoft to make porting games from Xbox to Windows 10 easier, or vice versa, but it could also be part of a plan to give PC full access to Xbox One's game library.

In a way, this upgraded feature set could turn gaming PCs into fully compliant Xbox One systems, though at this time it remains unknown what limitations will be placed on PC and how well the functionality will work in practice. 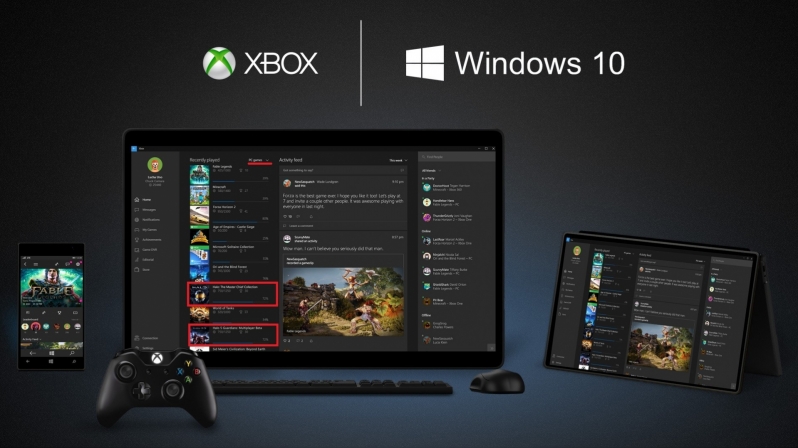 Moving forward, Microsoft plans to expand its Xbox gaming platform, with Project xCloud expanding Xbox Gaming outside of the traditional Xbox hardware ecosystem while GameCore could bring official Xbox One game compatibility to Windows 10. With both of these changes, Microsoft has the opportunity to expand the user base of the Xbox gaming ecosystem significantly.

If Microsoft can deliver Xbox One game support on Windows with adequate performance levels, exclusives like the Halo Master Chief Collection, Rare Replay and others will become playable on PC, which is great news for PC gamers. There is even a chance for Xbox and Xbox 360 emulation to come to the platform, which would be a big deal for PC gamers (Red Dead Redemption on PC?).

You can join the discussion on Microsoft working on Xbox One compatibility with PC on the OC3D Forums.

AlienALX
It will make their life a lot easier I know that much.

This was hinted at when Windows 8 first launched BTW. It had code in it that was related to Xbox.Quote

Daiyus
I was considering getting an Xbox One X at some point in the future after selling my Xbox One to friend over Christmas (their kid wanted one, so I let it go cheap).

Maybe I'll just wait a bit longer and see how this pans out. I've got plenty of games to keep me busy on PC and PS4 anyway. Not to mention the TV series I need to catch up on. And the pile of books...Quote

looz
Hmm, making the Xbox ecosystem more flexible would let them introduce newer models of Xbox more frequently as well, and with some luck those might also be hackable.Quote

WYP
Quote:
This sounds a lot like my life, only the list gets longer over time. I have far too many games in the "need to finish this" pile.Quote

I was pleased to find that out.Quote
Reply