Malwarebytes claims that Mac infections increased by 400% in 2019

Malwarebytes claims that Mac infections increased by 400% in 2019

Mac Malware is on the rise, at least according to the anti-Malware software provider Malwarebytes, who have reported a whopping 400% increase in threat detections in 2019.

While yes, much of this change is due to the growing usage of Malwarebytes on MacOS-powered systems, and increased Mac system sales, Malwarebytes has also reported an increase in threat detections per endpoint. In other words, Mac systems are getting targetted by more malware, with the average system getting hit by 11 threats in 2019, which is two times higher than 2018's average of 4.8 threats.

An average of 5.8 threats hit the average Windows system in 2019, according to Malwarebyte's statistics, which means that MacOS is now getting hit with more Malware than Windows, highlighting the increased attractiveness of Apple's ecosystem to cybercriminals.

Malwarebytes has warned that macOS's built-in security features have not cracked down on adware and PUPs to the same degree as malware, "leaving the door open for these borderline programs to infiltrate" systems.

In the past, many claimed that "Macs didn't get viruses", but that claim isn't just false, it's dangerous. macOS users need to be wary of online threats, and Apple needs to start taking its security more seriously, assuming Malwarebyte's stats are accurate. 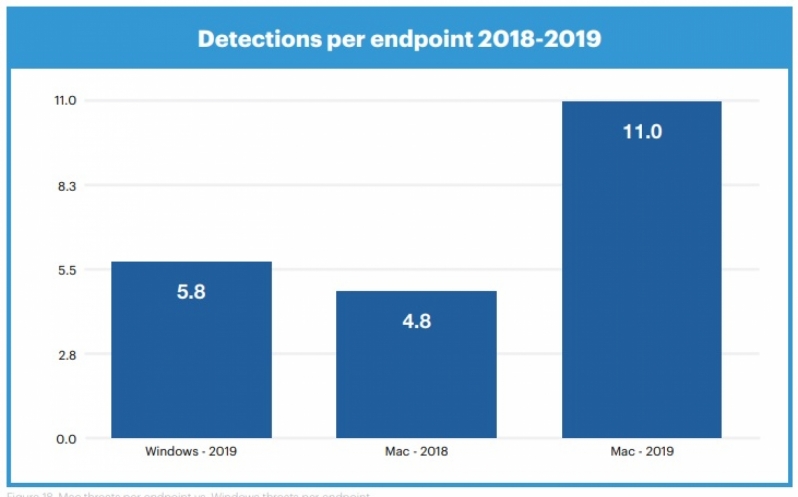 In 2020, it is likely that macOS attacks will increase further, as Apple's recent sales boosts have only made the company more attractive to attackers in recent months.

You can join the discussion on Malwarebytes reporting that Mac Infections have increased by 400% on the OC3D Forums.

Special Thanks to NeverBackDown for bringing this news to our attention.

g0ggles1994
My guess is that Mac's are selling more and more; making them a target for malware. That plus the mindset "Mac's don't get viruses" doesn't help either, at least 75% of Mac owners I've met don't get an antivirus for that reason.Quote

NeverBackDown
It's not surprising. They go after what's popular and that's Mac right now. Also seeing as people are under the assumption you can't get malware/PUP/etc also makes it an appealing target. Most users would be incapable of handling it. So I agree with g0ggles here.

This does open the door to Linux based OS's too. Seeing as the Mac is built off that source code it could potentially lead to faster development of viruses for Linux.Quote
Reply