This case will ship in August.

Earlier today, Lian Li revealed its upcoming LANCOOL 215 enclosure. This affordable $69.99 offering is due to ship in August 2020, offering users support for ATX and EATX motherboards, liquid cooling and ARGB (Addressable RGB) lighting out of the box.

In its stock configuration, the LANCOOL 215 offers users dual ARGB 200mm front fans, which intake air from a ventilated front panel to deliver PC builders a lot of airflow. At the rear of the enclosure, a non-RGB 120mm fan is included as an exhaust. This configuration gives users of this chassis three fans out of the box. Not bad for such an affordable PC case.

On the left side of the enclosure, the LANCOOL 215 features a large tempered glass side panel, which can be easily removed to allow users to replace their system components when required. The LANCOOL 215 can also support a 360mm at the front of the enclosure and a 280mm at the top of the chassis. This compatibility makes this case highly compatible with liquid cooling setups.

At the base of the chassis, the LANCOOL 215 features an ARGB illuminated Lian Li logo, which adds some extra flair to this affordable PC chassis. The Lian Li LANCOOL 215 also features a full PSU shroud to help enable tidy cable management within the case.

As mentioned before, Lian Li fans can expect this chassis to release in August for $69.99 in the US. At this time, the LANCOOL 215's pricing is unknown. 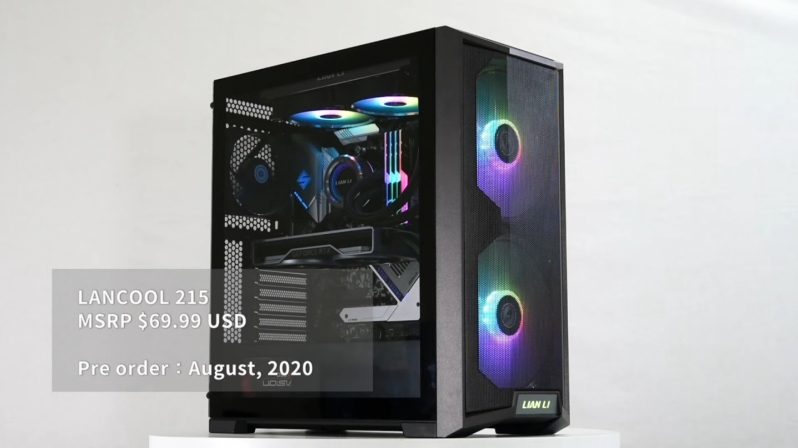 AlienALX
Hurrah, someone gets it.Quote
Reply