Benchmarks for AMD's Ryzen 5000 series of processors have started to leak onto the web, giving the world a glimpse of what Zen 3 is capable of. Today, thanks to APISAK on Twitter, we have our first Ryzen 9 5900X benchmarks, highlighting the processor's performance in Geekbench 4.

In Geekbench 4, our highest single-threaded result comes from Intel's i9-10900K, which achieved a score of 6645. With AMD's leaked Ryzen 9 5900X results, AMD's 12-core Zen 3 processor has an 8.68% performance lead. Not bad for a processor which has lower single-core clock speeds and a lower TDP. When compared to our Ryzen 9 3900XT results, this leaked 5900X benchmark score is 17% faster. 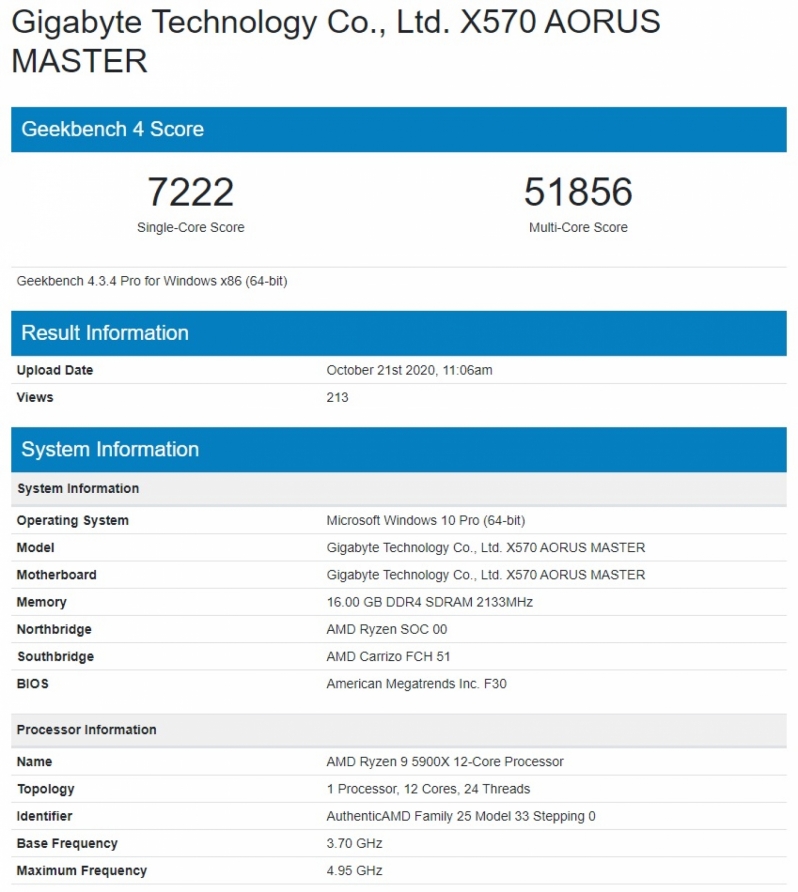 This leaked Geekbench 4 result adds credence to AMD's claimed performance gains for Zen 3, placing the company in a strong position as the company approaches its Ryzen 5000 series launch.

As always, we recommend that PC builders wait for reviews before committing to purchasing any new product.

You can join the discussion on AMD's leaked Ryzen 9 5900X benchmark results on the OC3D Forums.

Dicehunter
If Zen 3's single core performance actually translates well into games, And not just a few select benchmarks, Intel are going to have to seriously rethink their product stack going forward.Quote

Dark NighT
Quote:
They should have been doing that the moment Ryzen was released instead of mocking AMD and fiddling with 10nm.Quote

Dicehunter
Quote:
Agreed, But what a lot of people don't realise is that companies like Intel are actually headed by fat old out of touch men, Like most game companies infact i.e Nintendo, They only care about their profit margins, If they are good they'll just continue to do small incremental updates to their product stacks, Once Intel properly gets hit in the pocket book we'll start seeing them go into panic mode as they cannot meet their shareholders expectations.Quote

Dark NighT
Quote:
Capitalism at its finest, look at Bobby Kotick, a man who couldn't give a rat's ass about games in general and is just in there for the big business that gaming has become, that man doesn't care at all, yeah i think we could have an endless discussion about this but the point is very strong with Lisa Su, she's an enthousiast engineer with the qualifications to lead the teams and she's been absolutely fantastic with it.


We need more of those people in leadership positions at big corperations, but i doubt this will happen anytime soon.Quote
Reply