The game has an 'OVERKILL' graphics preset

CD Projekt Red's Cyberpunk 2077 is easily one of the most highly anticipated games, regardless of your chosen platform. Yesterday, CD Projekt Red released a 48-minute gameplay demo for Cyberpunk 2077, showcasing spectacular visuals and a detail-rich world that is full of civilians and activities to work through.

This demo sent many questions spinning through the minds of gamers. Is Cyberpunk designed for next-generation hardware? Will CD Projekt be teaming up with Nvidia once again and will Cyberpunk make use of cutting-edge graphical techniques like Real-Time Ray Tracing on PC.

In the screenshot below we can see options for Nvidia HairWorks, which was available in The Witcher 3 and an option for Nvidia Raytracing, which is likely to make use of Nvidia's RTX technology.

This screenshot has not been confirmed as legitimate, though the Cyberpunk 2077 twitter account has called Nvidia RTX "Beautiful" in the past and has stated that they "don’t have any details to share at the moment" when questioned about RTX support. 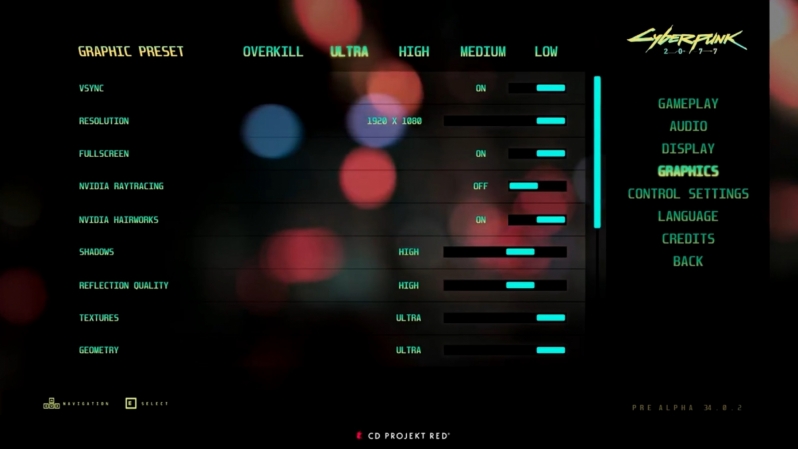 At this time, Cyberpunk 2077 has no firm release date, with many fans suspecting a 2020 launch. This release timeframe would place Cyberpunk 2077 within the realms of next-generation graphics cards from all manufacturers, perhaps even into an era of post-Turing 7nm GPUs from Nvidia.

You can join the discussion on Cyberpunk 2077's alleged support for Nvidia Hairworks and Ray Tracing on the OC3D Forums.


The irony being that it will be at least one more generation of GPU launches before you'll be playing this on your shiny new Nvidia GPU.


Who knows, they might even be powerful enough to crank the resolution and framerate above 1080p/30fps with RTX enabled

Wraith
Quote:
Pretty much the same as when the witcher 3 launched and Kepler/Maxwell struggled it's just progress is all. Embrace the new technology. If you want to see the development as the years have gone on check out Nvidias demos on their goodies page.Quote

TheF34RChannel
Oh the never ending hate. Just turn it off - no card will be able to run it properly for 1-2 years; its implementation is irrelevant. No one is putting a gun to your head and forcing you to get an RTX card and enable RTX in-game.Quote

Dicehunter
Quote:
Maybe in 2 years we'll have the 4080 Ti that will end up costing £2000 and then we can run all settings at max