Kingdom Come's Patch 1.3 is here with performance gains and a tonne of features

Kingdom Come's Patch 1.3 is here with performance gains and a tonne of features

Kingdom Come: Deliverance released on PC and consoles on February 13th, receiving mostly positive reviews with a few misgivings. Warhorse Studios responded positively to many of these criticisms, announcing plans to make changes to their save system, work on the game's performance issues and fix some of the game's bugs and other issues.

Today marks the release of Kingdom Come version 1.3, a patch that is designed to offer smoother framerates, a new "Save and Exit" and some new graphical options on PC. On PC this update weighs in at 5.7GB, with the console version of the update being set to release within the next few days, offering a long list of changes, including an updated lockpicking system, travel on horseback, and over 300 quest fixes.

On PC the game will now offer a built-in V-Sync option, an option that previously required modifications to the game's config files, now offering on, off, 30FPS and 60FPS options. Anti-Aliasing options are also available with Off, SMAA 1x, SMAA 1TX and SMAA 2TX options. Steam Cloud Saving has also been enabled within the game. 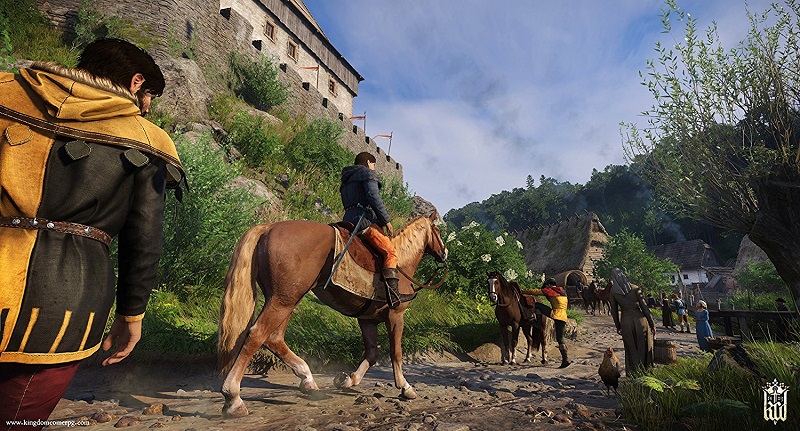 Below is Kingdom Come: Deliverance's full 1.3 patch notes (prepare for a long read):

- The game now has Save and Exit feature.
- Saving is much more robust and saves won't get corrupted even if the game crashes while saving.
- Performance improved
- LoD switching tweaked, reducing pop-in and improving texture streaming.
- Stuttering in some areas reduced.
- Slightly smoother framerate on Vsync 30. (Consoles and some PCs)
- Improved lockpicking
- New interface design makes it much easier to hold the sweet spot while turning the lock.
- Easy and Very Easy trunks are now easier to lockpick when playing with a controller. (Mouse difficulty unchanged)
- Improved pickpocketing
- You will no longer get caught if you stop at the beginning of the minigame. (Unless someone sees you)
- The risk indicator is now much more precise. When green, you are sure not to get caught.
- Alchemy bench will no longer shoot you into the air.
- The last quest with Lord Capon is now visible on the map when he is ready to assign it to you.
- Guards won't frisk you so often.
- Your horse shouldn't get stuck when jumping fences.
- Horse items are cleaned along with player items in bathhouses.
- You can see when looking at a bed whether it will save your game.
- You can sleep on beds without having to sit down first.
- Levelling up stealth by sneaking past enemies is more consistent.
- Sneaking past sleeping NPCs is now easier.
- Some easily accessible trunks with extremely good loot have been removed.
- Cave mushrooms can now be found in many other damp places.
- You can no longer autocook potions that you haven't brewed by hand at least once before.
- German voiceovers will no longer cut off in mid-sentence in cutscenes.
- Late game player strength tweaked
- Some combat perks that were unintentionally overpowered were tuned down.
- Weapons scale less with high-level stats.
- It should now be much harder to kill high-level enemies with one hit. (Unless they're helmetless. Stupid Runt...)
- Other combat system tweaks
- "Untargeted attack" exploit fixed.
- Enemy combat archery AI improved.
- Guards now react to combat more aggressively.
- And many other minor tweaks.
- (PC only) It is now possible to select different types of anti-aliasing.
- (PC only) It is now possible to set VSync to 30 or 60 or disable it completely.
- (PC only) Steam Cloud saving enabled.
- And over 300 other fixes in various quests.

This patch delivers some very positive changes for the title, delivering changes which we specifically requested in our Kingdom Come: Deliverance PC performance review. Thank you Warhorse for listening.

You can join the discussion on Kingdom Come: Deliverance patch 1.3 on the OC3D Forums.

Dicehunter
Nice ! just curious but what's with the Thread Ripper banner above the article ? Are there TR specific optimisations ?Quote

NeverBackDown
Just finished the game at 52 hours. I had my share of bugs like the alchemy one and textures popping in and out but it was never to bad

But nice to see a massive update. And thankful I finished the game before it came out to avoid losing savesQuote
Reply