Intel's 144-layer QLC NAND is coming, and Penta-Cell NAND is on the Horizon

The race is on to make Solid-State Storage more affordable and to accomplish this Intel plans to stack its NAND higher and to force more data bits into every NAND cell. Both of these methods aim to increase the storage densities of Intel's NAND technology and kick mechanical hard drives to the curb in mainstream notebooks and servers.

Today, Intel uses QLC (Quad-Level-Cell) NAND within its most affordable drives, having recently showcased their 96-layer QLC NAND in their upcoming 665p SSD. In 2020, Intel plans to scale its QLC NAND to new heights, offering 144-layer NAND stacks which will provide a layer boost of over 2x in two years. With each new layer of QLC memory, Intel is adding more storage potential to each NAND stack. This change increases the storage density of Intel's NAND while also delivering more potential storage per NAND wafer. 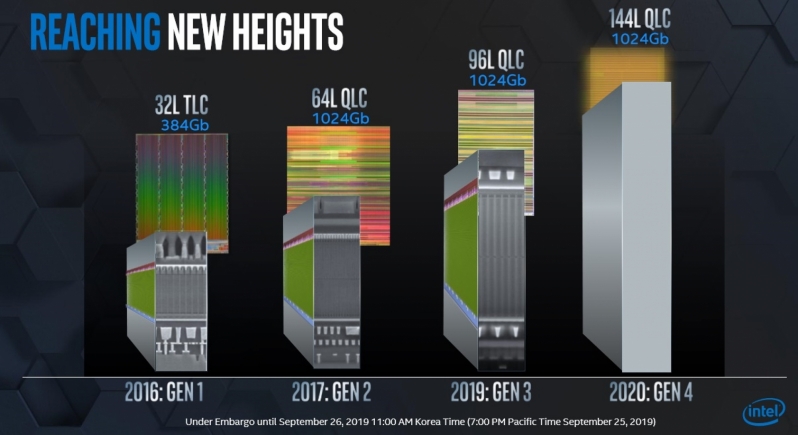 While most of the industry currently uses Charge Trap Flash (CTS), Intel has remained one of the only manufacturers to use a different technology called Floating Gate NAND. Intel has found that its method of NAND creation is more easily scaled to higher bit counts, partially explaining why Intel has become one of the most largest QLC SSD makers.

Moving forward, Intel plans to create PLC (Penta-Level-Cell) NAND, offering five bits of data per cell, rather than the four bits offered by QLC NAND. This will represent a 25% increase in storage capacity per NAND cell over QLC. At this time, it is unknown what the performance consequences of this change will be.

PLC NAND isn't expected from Intel for another few years, so until then, the company will have to innovate with its QLC product offerings. 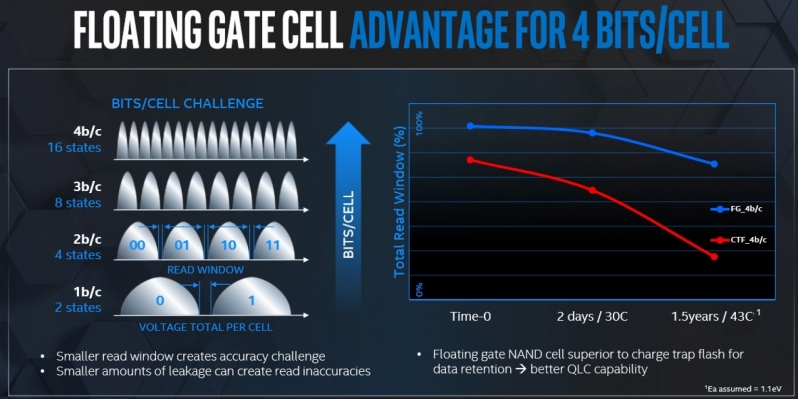 While QLC NAND has its disadvantages over TLC (Triple-Level-Cell) NAND, it is capable of offering performance levels that are good enough for the average user while also delivering low enough prices to make the industry reconsider its use of mechanical hard drives.

With its QLC NAND, Intel plans to move areas of both the datacenter market and consumer PC markets away from HDDs and onto affordable SSD storage solution. Today 1TB QLC SSDs are available for around £100, and with Intel's latest NAND innovations those prices have the potential to decrease further.

The future of the SSD market is an exciting one, especially if you are looking for the best value for money. 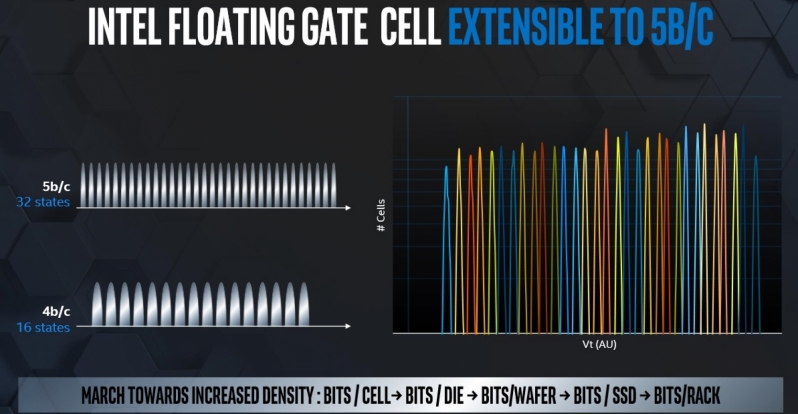 You can join the discussion on Intel's 144-layer QLC NAND and PLC NAND plans on the OC3D Forums.

"Intel's production costs per GB of NAND, enabling higher margins for Intel, and [s]lower[/s] higher pricing for their customers."Quote

demonking
Quote:
I agree here, Next gen hardware will have next gen prices. I don't understand the market well enough but I cannot imagine the costs involved in producing HDD's being cheaper than SSD's, Materials maybe but definitely not production.
And I doubt we will ever see an Intel 1tb SSD for south of £40.Quote

Bartacus
As much as I hate Intel on the CPU front, their SSDs have been good deals for years now. You cannot get a 2TB NVME cheaper than theirs ($255CDN, not on sale). If that prices drops on a black Friday sale, I might grab two. They aren't the fastest, but you can't beat the bang / buck ratio.Quote
Reply