Within the next year, Intel is due to release its Rocket Lake series of Core Desktop processors, offering users a new core architecture which focuses on single-threaded performance improvements.

If recent rumours are to be believed, Rocket Lake will offer users fewer cores than today's Comet Lake processors, maxing out at eight cores and twelve threads. Intel hopes that this shift will be countered by single-threaded performance gains, allowing the company to deliver boosted performance across a wider variety of workloads than the company's prior product generations.

Based on Intel's leaked Rocket Lake results, Intel's multi-threaded performance isn't overly impressive, lagging behind i9-9900K results. These performance figures could be due to TDP restrictions on Intel's early CPU samples, restrictions to all-core clock speeds or other limitations.

Strangely, Intel did not mention Rocket Lake during its Q2 2020 earnings call, even though the company's post-Rocket Lake Alder Lake architecture was mentioned. With Rocket Lake reportedly being based on Intel's ageing 14nm lithography, it is likely that Intel wanted to avoid adding more fuel to the fire regarding its process tech failings. 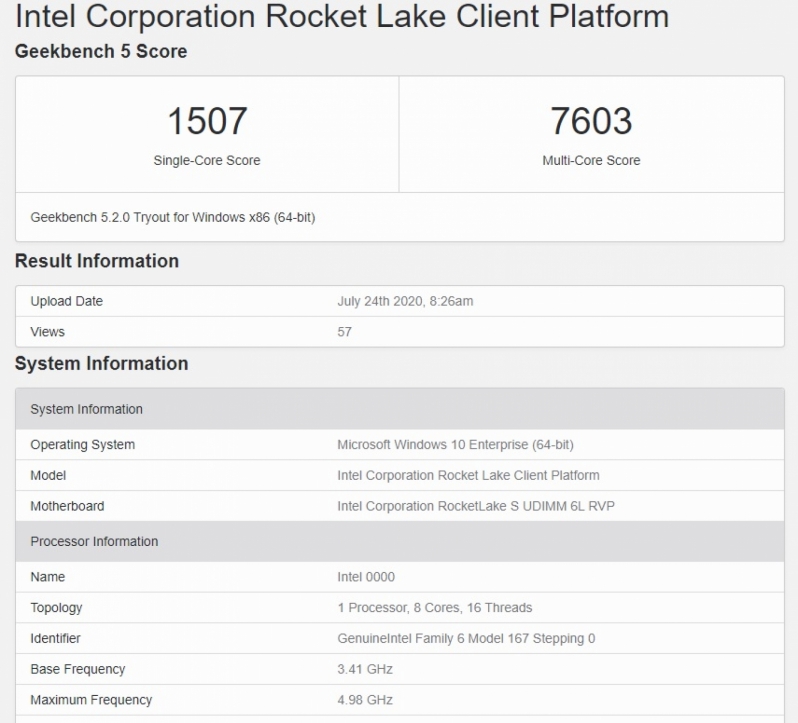 You can join the discussion on Intel's 5GHz Rocket Lake CPU sample on the OC3D Forums.

A7ibaba
It's really sad to watch all of this. Like some retarded bird flying around and hiting windows with no clues where to go and what to do.Quote

What I find interesting is that it doesn't seem to run AES in parallel at all for some reason. Oh and I might have -200MHz AVX offset, I can't remember off the top of my head.Quote

Avet
Quote:
Should be rumors and sixteen.

I don't think even Intel knows when will they release what CPU. At this point, they should just keep quiet until they have CPUs made and waiting to be shipped. Like Nvidia and AMD. No one knows what GPUs they will launch or when.Quote

AngryGoldfish
Quote:
Rumours is spelt with a 'u' in the UK.Quote

OC3D is a UK based company and site.Quote
Reply