Today, Intel has officially revealed its Thunderbolt 4 specification, offering users full compliance with both the USB4 and Thunderbolt 3 specifications, as well as "universal cables" that are up to two meters in length. 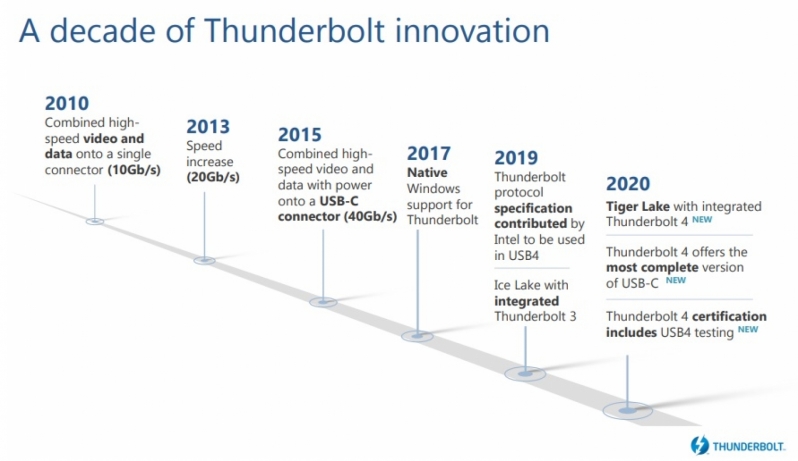 USB4 can be supported in a multitude of ways, and Thunderbolt 4 is designed to deliver full USB4 speeds, requiring both system and accessory and cable certifications to ensure adherence to Intel's standards. USB4 demands a minimum of 20Gb/s speeds, whereas THunderbolt 4 demands 40Gb/s speeds.

With the simplicity of a single USB-C port, Intel will support up to two 4K screens, and data transfer rates of up to 3GB/s. Thin and light laptops will also be required to support device charging through Thunderbolt 4, but only of the device can be charged with a 100W connection. With Thunderbolt 4, Intel promises charging and uncompromised data/video connectivity through a single cable.

Thunderbolt 4 will also mandate the use of VT-d-based Direct Memory Access Protections, which will prevent Thunderbolt 4 from being hit by the same DMA attacks as older Thunderbolt devices. An example of this type of attack is "Thunderspy", an attack vector which came to light earlier this year. 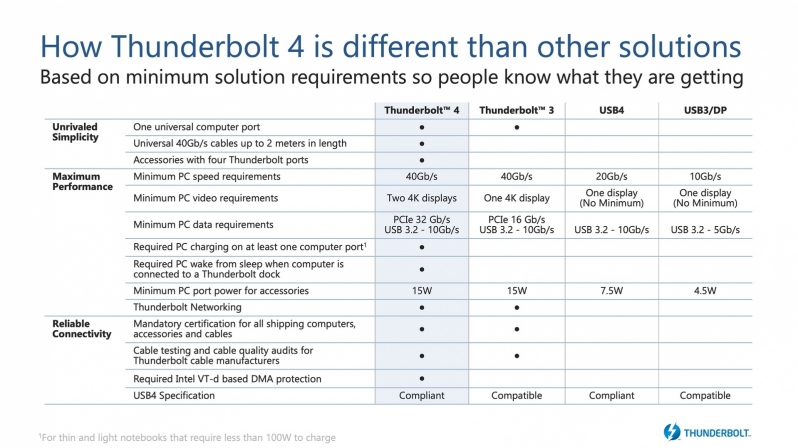 Intel has stated that the first PCs with Thunderbolt 4 support will become available this year, including notebooks which were spawned from the company's "Innovation Program" called Project Athena. 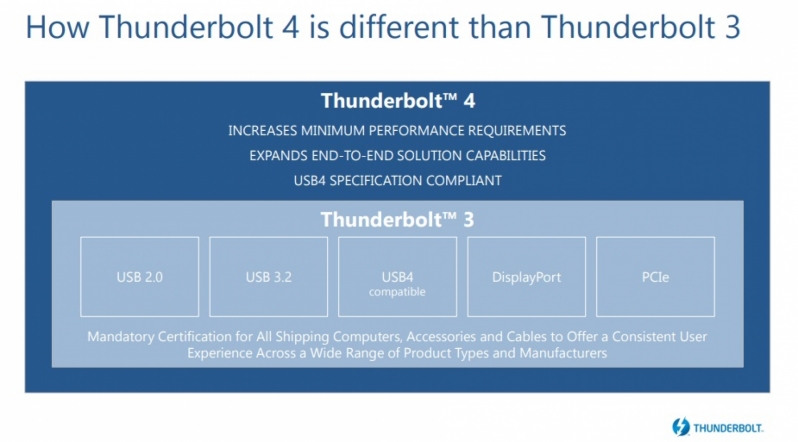 In the future, Intel plans to enable the creation of longer Thunderbolt-compatible cables, extending the standard's reach beyond the company's newly established 2m limit and to lengths of between 5-50 meters. These lengths are what Intel is "targeting", and no timeframe has been set for Intel to achieve this length target.

While Thunderbolt 4 may not increase the maximum speeds of the company's Thunderbolt standard, it will help deliver the maximum potential of the standard to a broader number of PC users. Bringing full USB4 compliance into the mix will also see Intel as the first platform provider to fully support the standard, allowing them to capitalise on USB4's potential.

You can join the discussion on Intel's Thunderbolt 4 standard on the OC3D Forums.

NeverBackDown
I love this. Slowly getting to a one cable future. Now we need more devices. It's mostly only for charging laptops at the moment.Quote

g0ggles1994
If they want this to become standard, they need to make it vendor agnostic. Yes, handing the specifications over to USB-IF was a good start; but they need to drop their certification fee as well. Then the market will adopt it left, right, and centerQuote

NeverBackDown
Quote:
It's been a free standard for a few years now. Intel is just the only ones who are making the chips. Nobody else has started producing their own. This is because it's built into their CPUs so there was little reason to make an extra dedicated chip that would add more ports when Intel already supported upto 2 ports using 2 lanes each(or 1 port at 4 lanes).Quote

IE Intel only started allowing other companies to make TB controllers last year (According to them) with the release of the tech to the USB-IF, and even now they still charge a certification fee for Intel/official ThunderBolt certification.

Until the ASRock X570 Phantom Gaming ITX/TB3 Intel had outright rejected certification for any other attempt at using the Thunderbolt chips(Which have always existed in discrete forms, it's only with late 2019 mobile systems that a TB host controller is actually part of the CPU) from being used with AMD platforms. NOTE: It was *NOT* for technical reasons, these Thunderbolt host controllers were tested to work fine with previous AMD platforms with a simple firmware modification that disabled checks.

There's little doubt imo that the artificial practical limitations placed on who could create Thunderbolt devices, and the huge costs of certifying TB devices officially, has hampered the growth and adoption of it. Even now it sort of feels like too little too late for TB4 unless they drop or at least open up the certification fee and process, especially when vendors can get much of the actual functionality from the USB4 spec.Quote

NeverBackDown
It's free and you're just plain wrong.

You love to always be right but good luck arguing with Intel's own website. Clearly says royalty free. You also cannot say it's never been free then immediately say it's free in your next sentence. You don't pay for it. It may be integrated with USB-IF but that does not mean any USB C is TB. There is still a difference.

In addition to this in today's announcement the only thing Intel mentions on their website, is mandatory certification. Nothing about a fee.

Your argument of certificate fees are based off a Tom's hardware article that was inferring the information that was not said by Intel. When they announced TB4 in January TW reported on this when Anandtech(widely respected), CNET, etc did not report such a fee.

From Jan 7 this year TW article quotes Intel saying:
"Thunderbolt 4 continues Intel leadership in providing exceptional performance, ease of use and quality for USB-C connector-based products. It standardizes PC platform requirements and adds the latest Thunderbolt innovations. Thunderbolt 4 is based on open standards and is backwards compatible with Thunderbolt 3. We will have more details to share about Thunderbolt 4 at a later date."

It says nothing more than what it says. If you can find where they get the certificate fees from that quote, which the article is based off of, then by all means highlight it. They made quite a stretch saying it requires it. Also doesn't make a lot of sense to charge people a certification fee when Intel's own CPUs now support it. 95% of the work is done. All they need is to make the traces to the port.Quote
Reply