Humble's Latest Monthly Bundle is a Steal for Spyro fans, but a betrayal for existing owners

Activision should have no goodwill from fans after this

Humble's Latest Monthly Bundle is a Steal for Spyro fans, but a betrayal for existing owners

There is no getting around this, Humble's November Monthly Bundie is a steal, even without considering the bundle's future unlocked. Right now it offers PC gamers the Steam versions of the Crash Bandicoot N-Sane Trilogy, Call of Duty: WWII and the Spyro Reignited Trilogy for £10/$12. Better still, more games will be unlocked on November 1st, adding more value to the mix.

Even at £10, this bundle would represent a price cut of over 70%, and if you assign any value to Activision's other bundled games, the price cut becomes steeper. Activision allowed this bundle to be created knowing that Steam's refund window will be closed for all early purchases of Spyro were closed. They would have also known that all early purchasers of the Spyro Reignited trilogy were paying far too much for the game given today's pricing. 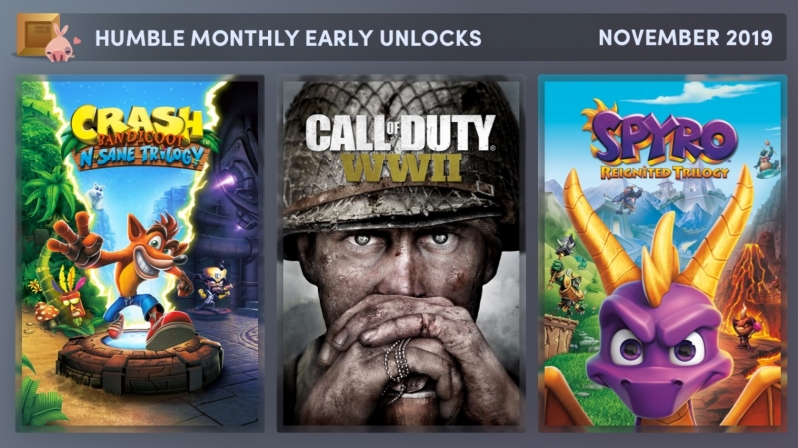 Activision did a disservice to their customers by discounting the Spyro Reignited Trilogy this steeply a mere month after launch. While customers shouldn't expect game pricing to remain the same forever, it is hard to see a 70+% price cut this soon as anything other than a betrayal of early purchasers. Activision has conned PC's biggest Spyro fans.

Regardless, as it stands, November's Humble Monthly bundle presents insane levels of value for PC gamers. Add this to access to the Humble Trove, a catalogue of 60+ free DRM game downloads, and discounts on the Humble Store, and this bundle will quickly become too good to miss for PC gamers, especially those who are fans of PlayStation 1 era platformers.

You can join the discussion on the latest Humble Monthly Bundle and Spyro's N-Sane pricing on the OC3D Forums.

ET3D
Thanks for the heads up. Never considered buying a Humble Monthly before, but Spyro and Bandicoot look like a killer combo.


(Not that I'd play them any more than I play any other games...)Quote

Daiyus
I have to admit, this is why I very rarely buy games at or near launch any more. I will always wait for a good deal to crop up, even if I end up waiting for months or years.

I bought this months bundle simply because I wanted to get Spyro at some point (PlayStation was my first gaming system), WWII could be a fun campaign for a few hours, and I gave the N.Sane Trilogy away as I already own it.

Just getting WWII and Spyro for £10 and change is an absolute steal. If you don't already own Crash then it's an insane deal. I do feel bad for those that haven't yet learned to wait a little while after release to buy games though.Quote
Reply