There's a reason why the delay was for one month

When Red Dead Redemption 2 was unveiled for PC, many gamers were disappointed that it wouldn't receive simultaneous PC launches on Steam, the Epic Games Store and the Rockstar Games launcher. On November 5th, Red Dead Redemption 2 will release on RockStar's game launcher and the Epic Games Store, with the Steam version arriving one month later in December.

This announcement raises one crucial question. Why was Red Dead Redemption 2's Steam release delayed for one month? Why not six months like Borderlands 3 or one year like Metro Exodus? The answer is simple; it's because Valve wouldn't let them.

Last month, Valve updated its Steam distribution agreement to add the following text. This prevents games from releasing on Steam more than 30 days after the game's initial release on other platforms. Basically, if you don't release your game on Steam within 30 days of other storefronts, Valve doesn't want to sell your game anymore.

Delivery. Company shall submit the applications to Steam for release no later than the first commercial release of each application or Localized Version, or, if already commercially released as of the Effective Date, within thirty (30) days of the Effective Date. Thereafter, Company shall submit to Steam any Localized Versions and Application Updates (in beta and final form) when available, but in no event later than they are provided to any other third party for commercial release. Company shall provide these copies in object code form, in whatever format Valve reasonably requests.

Thanks to Valve's updated Steam Distribution Agreement, Valve has been able to prevent Red Dead Redemption 2's platform exclusivity from lasting more than 30 days. If this agreement wasn't already in place, it is hard to know how long Red Red Redemption 2 would have been delayed on Steam.

The reasoning behind Red Dead Redemption 2's Steam delay is obvious. Rockstar and their Publisher Take-Two Interactive wants a larger slice of their game's revenue. With Steam, Valve takes a 30% cut from initial sales, Epic Games takes 12%, and Rockstar's game launcher get a 100% cut, minus their platform running costs.

Releasing late on Steam ensures that Rockstar/Take-Two get a more significant cut of Red Dead Redemption 2's initial sales value. On the Epic Games Store, Rockstar Games receives 25% more money per sale than the game's Steam version, assuming equal pricing on both Storefronts. With a major release like Red Dead Redemption 2, why would Rockstar want to give away that extra 25% to a platform holder like Valve? Red Dead Redemption 2 is a good enough game to sell itself without Valve's influence, so why pay Valve such a high percentage of sales? 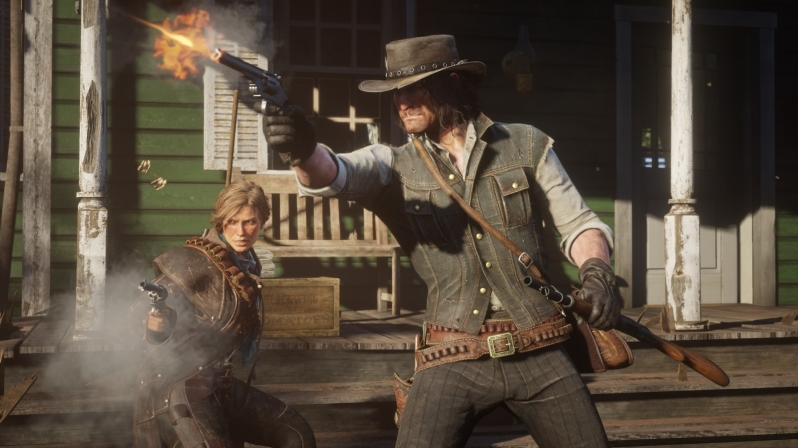 Whether or not you consider Red Dead Redemption 2's Steam delay as a greedy move or a smart business decision is a matter of opinion. What you should know is that the decision to delay the game's Steam release is designed to ensure that Rockstar maximises its cut of game sales.

You can join the discussion on how Valve prevented a longer delay for Red Dead Redemption 2's Steam version on the OC3D Forums.

Warchild
Everyone so quick to slam Epic but still fail to see the greed from Valve.

Its basically saying either you give us our 30% cut or don't bother launching on our platform ever. This is bullying.

Everyone knows most sales will come from Steam, and Valve know it, so in doing this agreement its passively forcing them to comply.

I hope for Rockstar sake that everyone goes via their own platform and give Valve a middle finger. Sadly we know there are too many Steam cry babies who don't like change.Quote

ET3D
The war is heating up. I wonder how this will play in the long run. Sure, Valve still has enough power to push publishers around like this, but if anyone decides to not appear on Steam, will Valve truly be willing to give up on that game for good?Quote

WYP
Quote:
I'm wondering how long it takes for Valve to start making exceptions. Destiny 2 would not be on Steam now if this policy was enacted earlier this year.Quote

demonking
Anyone who see's Gabe Newell or Valve as the good guys in PC gaming is seriously deluded. All we have here is a business that has operated a monopoly for the last 2 decades trying not to lose it.
Its too late for Valve now, whilst I hate having to open so many different programmes to get to my games, I do despise valve though for the way they have handled everything.Quote

Legacy-ZA
I see it as; they have to pay a premium because they get access to a major market to sell their goods.

I personally don't want 7+ damn launchers on my machine and that while their platforms are inferior and nor do I want to keep re-adding friends on new platforms. Imagine having to use more than one twitter or facebook, imagine using 7+ of those?

No thank you. I would rather stick to Steam, even if I had to wait 1 year later. I still haven't bought new releases from companies that tried to force my hand to another platform. If devs asked nicely, maybe, but they don't, EVERYONE here is greedy, that includes Valve. If you have a better product, that will be used instead of others. That is, if you are not a fanboy, or have misplaced loyalty. Launch all titles on every platform at the same time, may the best man win.

It's customers that are ultimately getting screwed here at the moment.Quote
Reply