How to fix the Spyro Reignited Trilogy's animation issues on PC

Here's how we fixed Spyro's most annoying bugs

How to fix the Spyro Reignited Trilogy's animation issues on PC

The PC version of Activision's Sprto Reignited Trilogy released in a broken state, offering users unlocked framerate options an animation issues which cause the game to control strangely, an present a myriad of bugs and other problems when playing at framerates over 30FPS.

For starters, Spyro slides on every surface as if it was ice, ruining the game's precision controls. Beyond that, animations which cause doors and portals to open can also break, stopping in-game progression dead in its tracks. Thankfully, there is a simple fix which can be used to address the problem.

Sadly, our fix will not be considered as ideal for all PC gamers, as it required V-Sync to be turned on. Even so, this will be required for the game to control and operate correctly, at least until this bug is patched.

To get the Spyro Reignited Trilogy to run correctly on PC at framerate over 30FPS, you will need to activate V-Sync and turn the game's framerate options to "Unlimited". This allowed the game to run correctly using 60FPS framerates on our test system. This allowed the game to control correctly and allowed game progress to continue as normal. This process is also detailed in our full PC performance analysis for the Spyro Reignited Trilogy. 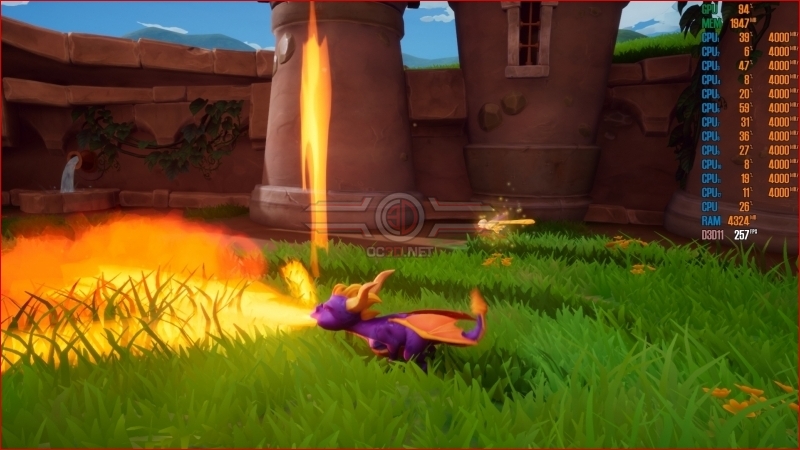 (An example of the game's broken animations at framerates over 30FPS, no flames should be pointing up)

While this fix is far from ideal for PC gamers who prefer not to use V-Sync, it remains a must for game progression to work as it should at high framerates. Hopefully, Toys for Bob and Iron Galaxy can iron out this issue with a future game patch.

More information about the PC version of the Spyro Reignited Trilogy is available in our full performance analysis for the game.

You can join the discussion on the Spyro Reignited Trilogy's framerate/animation issues on the OC3D Forums.