Here's what you need to run Warhammer 40,000: Darktide on PC, and some settings tips

Is your PC ready to run Warhammer 40K Darktide?

Warhammer 40K: Darktide is due to release on PC on November 30th, but pre-orderers of the game are currently allowed to play the game early on PC through the game's pre-order beta. Warhammer 40,000: Darktide is Fatshark game's psuedo-successor to Warhammer: The End Times - Vermintide and Warhammer: Vermintide 2, offering gamers a strong co-op experience with class-based combat in the Warhammer 40K setting.

Aside from Fatshark's move to the grimdark future of the 41st millennium, Warhammer 40,000: Darktide also brings with it a huge amount of technological progression over Fatshark's prior games. Darktide moves Fatshark Games to DirectX 12, implements ray tracing, features a new networking model, and features support for both DLSS, FSR 1.0, and FSR 2.0 upscaling. 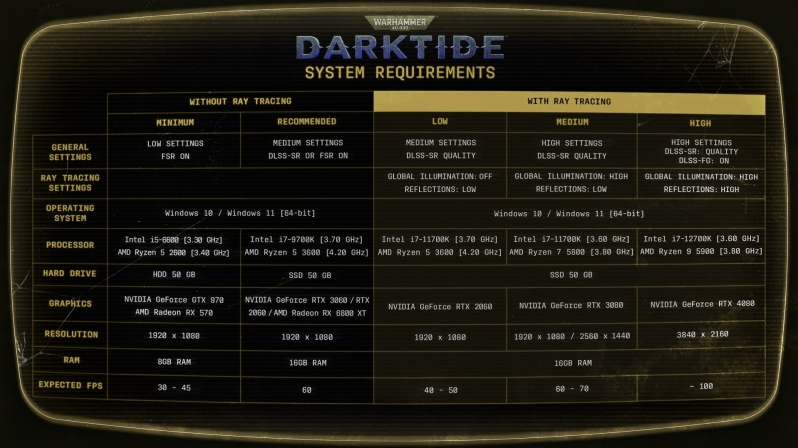 Warhammer 40K Darktide can be hard on both modern CPUs and graphics cards, and gamers who want to boost the framerate of Darktide have a lot of graphics options at their finger tips to get Fatshark's latest co-op combat game to run smoother on their systems.

For those who find the game to be GPU-limited, turning off ray tracing and enabling upscaling in the form of DLSS or FidelityFX Super Resolution is recommended. On top of that, lowering decal settings can increase framerates in demanding combat encounters.

When Darktide is CPU-limited, PC players should reduce the game's settings for Max Ragdolls, Scatter Density, Lens Flares, and Field of View settings can have a notable impact on game performance.

You can join the discussion on Warhammer 40K Darktide on the OC3D Forums.