The ASA has now ceased their investigation, concluding that the marketing materials for No Man's Sky mostly representative of the final product and were "unlikely to mislead" consumers. Amongst other things, it was alleged that the screenshots and videos used to advertise No Man's Sky is seen by purchasers as presenting better visuals, more complex alien life, space battles and several features that were not present in the game.

Below are a few statements from the ASA, stating that the advertisements were not found to be significantly different than the final game, with most differences being insignificant in the eyes of the regulator.

It is worth noting here that the ASA has no power to include the lies told by the game's developers in interviews and comments to the media before the release of the game. This means that the game's lack of multiplayer interaction, trade ships, factions, asteroid landings, space station destruction, ringed planets, complex creature behaviour and the presence of crashed ships to explore on planets.  Sadly, the ASA cannot include the lack of these features in their investigation, as it was not listed on any trailers, screenshots or in any other advertising materials.

we considered that the ad did not depict gameplay that differed materially from the footage provided by Hello Games, and that it was therefore unlikely to mislead,

the overall impression of the ad was consistent with gameplay and the footage provided, both in terms of that captured by Hello Games and by third parties, and that it did not exaggerate the expected player experience of the game. 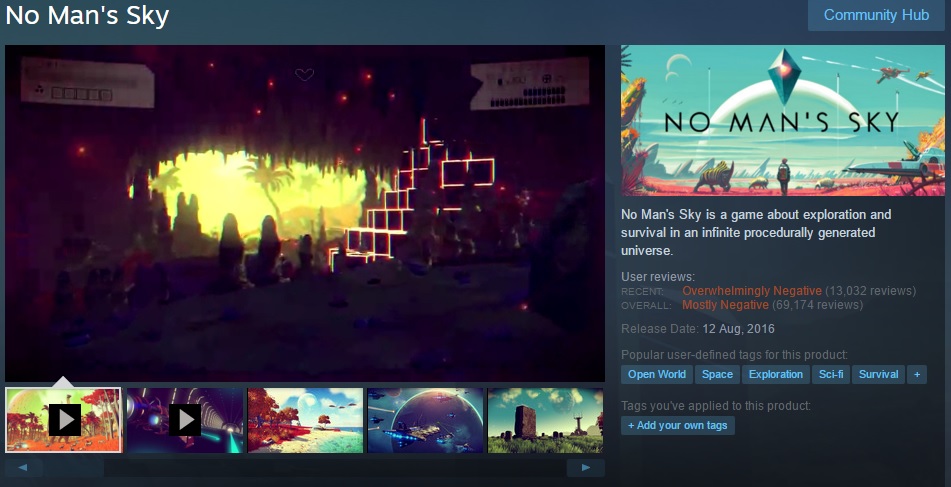 Most people can agree that No Man's Sky offered a lot less than was promised by the developers, but this investigation clearly highlights how little power the ASA has to investigate and punish developers who intentionally mislead consumers. In the ASA's eyes, Hello Games are completely innocent of any wrongdoing, meaning that developers can promise anything to consumers in interviews and in statements to the media without fear of punishment for "misleading" consumers when they fail to deliver.

Hello Games has now delivered their "Foundation Update" for No Man's Sky, delivering some of the promised features that were not present when the game released earlier this year, though even now the game still lacks most of the game's promised features.

You can join the discussion on Hello Games being cleared in the ASA's investigation on the OC3D Forums.

Hello Games has been cleared in the ASA's false advertising investigation.https://t.co/54S47H600T pic.twitter.com/wfVTPIS8Vx

SuB
What an absolute crock of horse manure... I cannot believe they're getting away with it

AlienALX
Quote:
I don't think it will matter much now. They've tarnished their name, that speaks volumes in gaming these days. Look at that other company who decided to start suing people and the impact it had.

Gaming is probably one of the biggest word of mouth things still to exist in capitalism. And nothing any corporation can do can stop that. They can hire bogus reviewers, make the games sound as good as they like but word still gets around.Quote

jimma47
Quote:
Legally they can only make their decision based on the advertising material, not other forums. I agree with you though and I'm glad I didn't pre-order it.Quote

GODuk
Well that was a waste of time! Let's all just TELL lies instead, as long as it's not what you see i'll be fine and will get away with it!Quote

Bridges
"from the footage provided by Hello Games"

aka: "none of have played the game or had the slightest clue what we were looking at".Quote
Reply