Is your PC ready to return to Lost Heaven

2K Games and Hangar 13 have released new details about Mafia: Definitive Edition's upcoming PC version, which is due to release on September 25th through both the Epic Games Store and Steam client.

On PC, Mafia: Definitive Edition will have access to a large number of graphical settings, with togglable motion blur and Depth of Field effects as well as low, medium, and high settings for the below options. Additionally, full PC system requirements for Mafia: Definitive Edition are now available, which match those which we detailed last week through an unofficial source.

Mafia: Definitive Edition is designed to run on Windows 10 based systems using the DirectX 11 API, supporting graphics cards as old as Nvidia GTX 660 and Radeon's HD 7870. The game will also require a minimum of 6GB of system memory, 50GB of storage space and a strong quad-core processor. 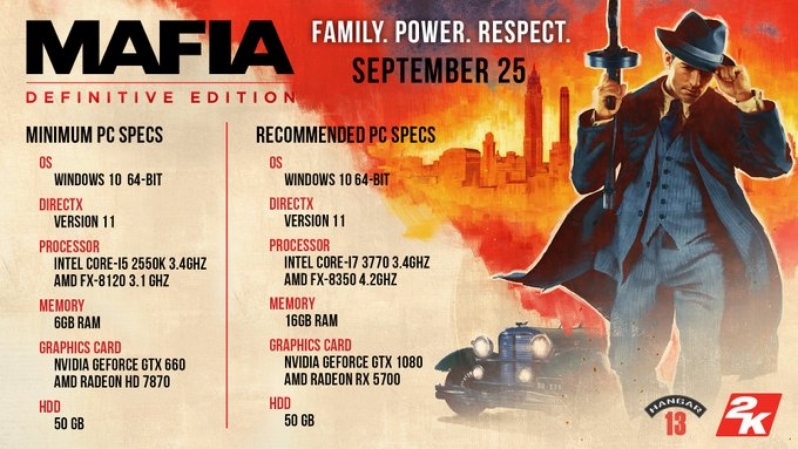 You can join the discussion on Mafia: Definitive Edition's PC system requirements on the OC3D Forums.

KingNosser
Not to bad, as much as i like how it looks mafia 3's engine no doubt, but the issue i have is mafia 3 looked like a nice world but the gameplay was pretty repetative and the world didn't feel alive really they did a lot right but it was average. so i will for sure wait for reviews on this and if it's changed too much from the first games play style, it's a wait for sale.Quote

AlienALX
Mafia III started out amazingly. The story was bloody brilliant. I really thought the reviews had it wrong and I was going to have a great experience. Then the dross set in. Do this, do that, repeat it, repeat again.

The first one was always the best, but the second one was cracking (again the story was brilliant and so were the characters).Quote
Reply