Halo: The Master Chief Collection has arrived on PC, starting with Halo: Reach. While the game is also available via Xbox Game Pass (for PC) and on the Microsoft Store, the game's Steam release has proven to be incredibly popular, reaching a concurrent player count of over 100,000 on Steam within two hours of the game's release.

This makes Halo: The Master Chief Collection one of Steam's most popular releases of 2019, placing the game 4th on Steam's concurrent players chart at the time of writing.

Given Halo Reach's low UK price of £6.99 on Steam, or £29.99 as part of the 6-game Master Chief Collection, it is easy to see why PC gamers are willing to give Halo: Reach a try, especially given its supports for higher refresh rates and resolutions than the game's original Xbox 360 release. Combine this with enhanced graphics, low system requirements and mouse/keyboard support, and we have a game that's guaranteed to sell like hotcakes. 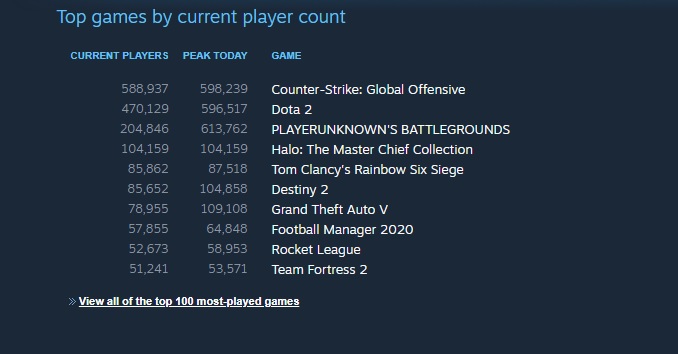 In the coming hours, it is likely that Halo: Reach's concurrent player count will continue to increase on Steam. Combine this with all of the game's Microsoft Store and Xbox Game Pass for PC players, and we could have one of 2019's most successful PC launches.

You can join the discussion on Halo: Reach having over 100,000 concurrent players on Steam on the OC3D Forums.

Warchild
I cant even get a single MCC game to run on MS store APP...Quote

WYP
Quote:
Same. Only Reach is out now. Trying the game on Steam now.

Update - Here is a workaround for the "no boot" issue.

Warchild
Quote:
Yeah I already worked this part out, but for me the game froze during booting up. Even the swirling logo to show its loading freezes.

However I noticed that waiting 3mins seems to then allow the game to run, so for anyone seeing the loading screen freeze up, just be patient and wait. It will work! MS need to patch this bug for sure.Quote

Warchild
Quote:
Ill try it out thanks.

For those wanting these features though, just wait a few minutes. What is deceiving is to see the logo that usually spins during loading times, freeze up to signify its crashed, when it actually hasnt.Quote
Reply