These days game patches are commonplace and post-launch DLC is plentiful in the AAA games industry. While these patches do provide consumers with a with vital bug fixes additional game content, they do take up additional storage on your PCs and consoles.
Today we have one big example of a game that has become significantly bulkier thanks to post-launch DLC and patches, with Gears of War 4's PC version not taking up over 100GB of system storage, taking up almost 20% more storage space that the game occupied at launch.

Gears of War 4 now has a big problem on its hands, as this excessive amount of additional storage is mostly dedicated to the game's multiplayer mode. This means that singleplayer-only players will need to spend a lot of time and bandwidth to download and play this game and dedicate a lot more storage space than was previously necessary to play the game.

This raises a very important question for the Windows 10 Store, as it is undeniable that some gamers would like to reduce this game's storage requirements by only installing desired elements of the game, similar to how several PC version of Call of Duty come with separate Single Player and Multiplayer downloads on Steam. 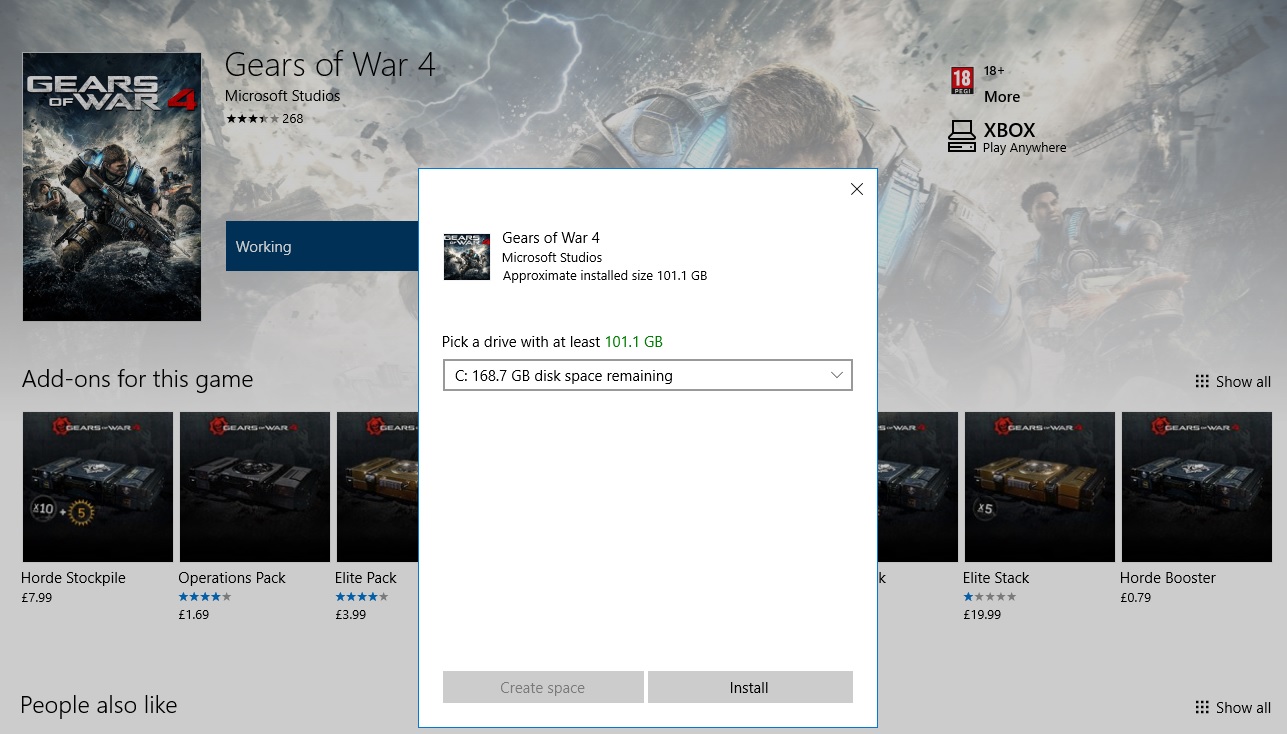 In a world where games are becoming increasingly large, it is important that gamers are able to reduce their game size to make the most out of their SSD and HDD space.

Right now on Steam PC gamers can disable optional HD texture packs for games like Middle Earth: Shadow of Mordor and more recently Fallout 4, allowing PC players to save storage space by not using high-resolution textures, which can have a limited effect on visuals at low resolutions and simply cannot be used by older hardware with 2GB of VRAM or less.

Moving forward games will need to get more modular, especially if games continue to explode in terms of storage requirements. Hopefully, Microsoft and other game developers and distributors will keep this in mind as large games are released in the future.

You can join the discussion on Gear of War 4 taking up over 100GB of storage capacity on the OC3D Forums.

SuB
Quote:
I completely and whole-heartidly disagree, storage space is as cheap as it's ever been.
Better visuals need better textures, and better textures take up more space. Same with all things. When you get to the brass tax of it 100GB is nothing in today's storage standards.Quote

Dicehunter
Wouldn't mind getting GoW4 but Microsofts pricing is a little insane considering it's been out for nearly 5 months now, £41.99 for the base game is a bit much.Quote
Reply