The game has earned an average of $9.5 million per day in the US between April 1st and 15th

Fortnite has proven to be one of the most popular games ever to hit iOS, making over $25 million after 30 days on the platform. Before April 1st the game was invite-only, making these earning even more impressive, with the game having almost 24 hours of downtime on April 12th due to technical issues.

Sensor Tower has estimated that the iOS version of Fortnite has earned $9.5 million on iOS between April 1st and 15th, making it the second highest earner on the platform. Daily spending on the application is currently said to have surpassed $1 million worldwide, making the iOS version a Fortnite a colossal earner for Epic games.

Right now Epic Games has not confirmed when they plan to release Fortnite on Android platforms, with many expecting that version of the game to release this summer. With iOS and Android combined, it is estimated that Fortnite will earn a combined $500 million across the two mobile platforms. 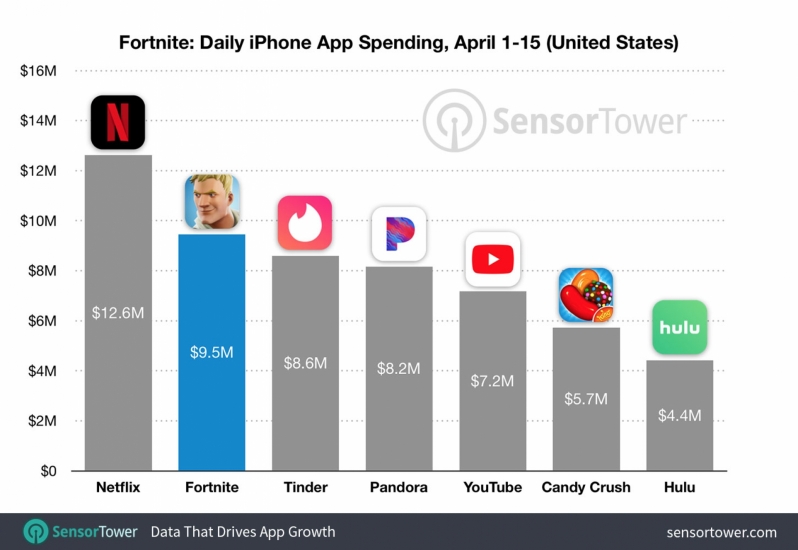 Epic Games has not released any official information about Fortnite's earnings on mobile, though it is undeniable that the game has become one of the most played games on iOS. Alongside its success on the platform directly, Fortnite also advertised the power of Epic's Unreal Engine 4 on iOS, with Fortnite delivering some impressive visuals on the platform despite its use of mobile hardware.

You can join the discussion on Fortnite earning over $25 million on iOS on the OC3D Forums.