For the next week Warhammer: End Times - Vermintide will be available to play for free

For the next week Warhammer: End Times - Vermintide will be available to play for free

To celebrate the launch of pre-orders to Warhammer: Vermintide II, Fatshark games has made Warhammer: End Times - Virmintode free to play on Steam, allowing PC gamers to play the original over a lengthy period before even considering a commitment to its sequel.
During this time the original game will be sold at a reduced price of £5.75, which is a 75% reduction from the game's usual £22.99 price point. This offer ends on October 26th.
Warhammer: End Times - Virmintide can easily be described as "Left 4 Skaven", offering an experience that is similar to Valve's Left 4 Dead allowing up to four players to battle together against the Skaven Hordes in an attempt to stem the Virmintide.

Players will be able to act as one of four classes, each of which has its own combat style and synergies with other classes with weapons that range from swords, axes and hammers to more complex weapons like bows, guns and magical staves.

The time of mortals is ending, and the reign of Chaos draws ever closer. The Dark Gods are at last united in a singular purpose, losing their madness across the world as never before. In the Empire of Sigmar, Karl Franz's gaze is focused on the incursion of the savage northmen, but it is not the only threat. As the Chaos moon Morrslieb waxes full, shrill voices echo through tunnels gnawed far beneath the Empire's cities, and a Skaven host swarms towards the surface. It emerges first in the city of Ubersreik, a screeching mass that consumes all before it. Soon Ubersreik is a charnel-town, drowning beneath the malevolent shadow of the Horned Rat.

Yet even in the darkest times, there are always champions to light the way. As Ubersreik cowers, five heroes, united by capricious fate, carry the fight to the rat-men. It remains to be seen whether they have the strength to survive, let alone work together long enough to thwart the invaders. One truth, however, is beyond all doubt: should these five fall, then Ubersreik will fall with them. 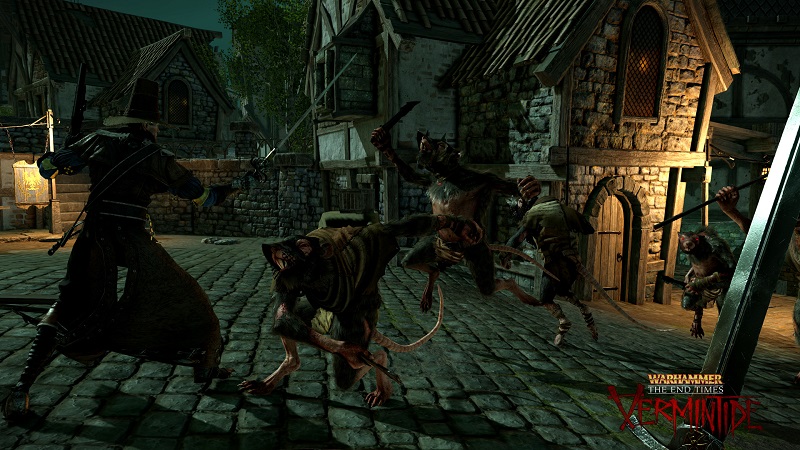 For those who are interested in playing Warhammer: End Times - Vermintide, here are the game's PC system requirements.

You can join the discussion on Warhammer: End Times - Vermintide being available to play for free on the OC3D Forums.