Square Enix has officially released Final Fantasy XV: Windows Edition's standalone benchmarking utility, releasing the tool alongside pre-orders for the title, which will retail for £34.99 on Steam, Origin and the Windows 10 Store.

The benchmarking tool will offer resolution options of 720p, 1080p, and 4K, with Lite, Standard and High graphical quality settings. The benchmark can be run in windowed and fullscreen modes and will take approximately six and a half minutes to complete.

The benchmark's High-Quality setting will feature support for several GameWorks features like HairWorks, Flow and TurfFX. This will make this mode the most demanding graphical preset by far, especially if HairWorks is as demanding as its Witcher 3 counterpart.

At the end of the benchmark, users will be presented with a score, which will highlight how well the final game will perform on your system. 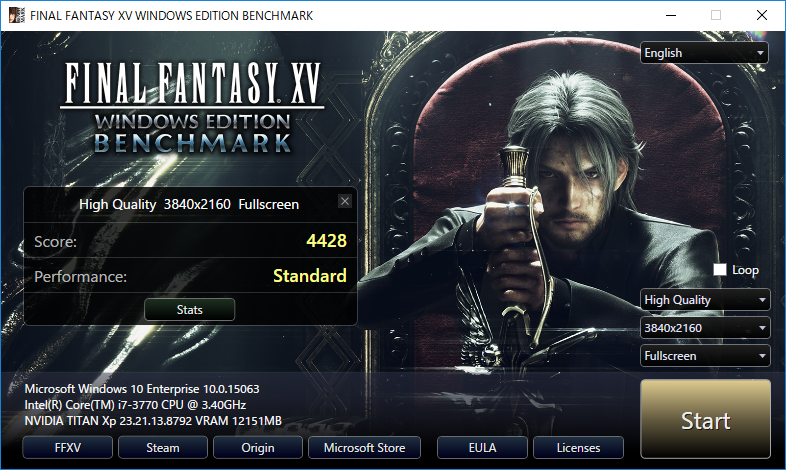 In case you need a refresher on the additional features in FFXV Windows Edition then here’s a handy list:

- Expanded Map: Insomnia City Ruins – all-new side quests and enemies such as Cerberus and Omega will be available through the expanded map of the Crown City of Insomnia. Players can also take on a battle with the Rulers of Yore

- A fully-controllable Royal Vessel boat, expanding the world of Eos and allowing players to explore the area between Cape Caem and Altissia. Players will also be able to fish aboard the vessel and discover new fish and recipes

- More than a dozen pieces of downloadable content including weapons, Regalia car skins and item sets

- Archive – players can review the “Cosmogony” stories scattered throughout the Final Fantasy XV world. Additional local myths and legends will also be placed in various new locations. Through them, players will be able to obtain more information about the world

You can join the discussion on Final Fantasy XV's standalone benchmarking tool on the OC3D Forums.

Permafrost
shame there is no love for 1440p or ultrawide

Dicehunter
Quote:
Yeah that I don't understand, 1440P is very popular on PC.Quote

Permafrost
Quote:
think it's best to give it a bit of time and they might update the tool, i'll be having a look tonight and see if i can force it to run at diffrent resolutions.Quote

hellboy99
Not bad I suppose for my PC