Do you feel sorry for those who paid full price for New Dawn?

Far Cry New Dawn released less than a month ago, launching on February 15th on PC, Xbox One and PlayStation 4 for a UK price of £37.99. Now, thanks to Ubisoft's Spring Sale, the game is now available with a 50% discount, an insane price decrease for such a new game.

That's right, Ubisoft reduced the price of Far Cry New Dawn less than a month after the game's release, effectively selling the game too early adopters with a 100% mark up over today's pricing, a trend that is becoming incredibly common in today's gaming landscape.

Reduced pricing for games is nothing new. Every retailer has to have a sale every once in a while, but in the gaming market, these promotional periods are coming closer and closer to release for many game publishers, so much so that we often wonder why anyone would buy a game from them at launch.

Another example of this is Fallout 76, which received a 33% discount at several online retailers a mere two weeks after the game's release on PC. 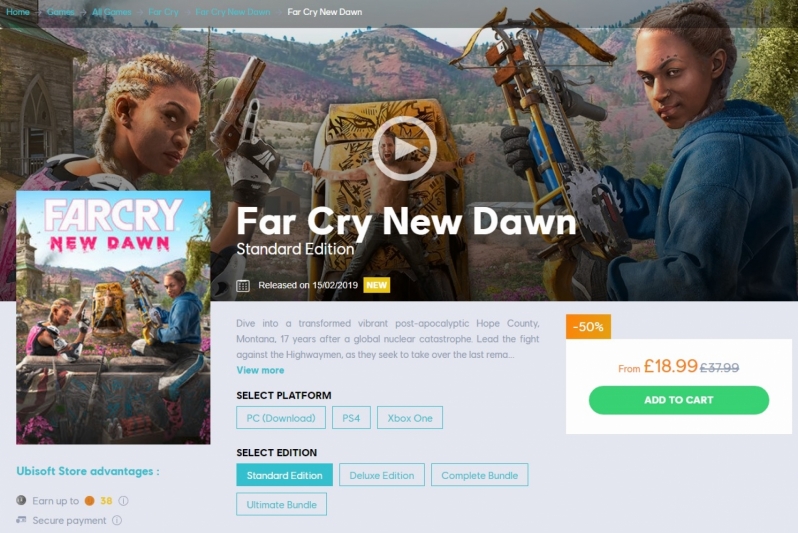 If you are interested in Far Cry New Dawn, Ubisoft's Spring Sale might be the ideal opportunity to buy the game, as Ubisoft are unlikely to give the game further discounts anytime soon.

You can join the discussion on Far Cry New Dawn receiving a 50% discount less than a month after launch on the OC3D Forums.

Warchild
Nope I dont. And I wish those who preorder these extortionate prices would also get the hint...Quote

AlienALX
I pre ordered at £23 or so. I'm not bothered in the slightest as I thoroughly enjoyed it.

Next up Division 2.Quote

Warchild
Quote:
fact is though, you didnt pay full price preorder which is a good thing.
I paid £25 for Div2 but theres no way I would preorder and pay their full 50/70/100 price tags.Quote

Wraith
Quote:
The savvy of us pre-order from CDKeys or other trusted resellers. I paid no more than £22 for Far Cry ND same for Fallout 76, Division 2 and Forza Horizons 4. The only gamers I feel for are console users, who have no choice but to pay top price then have a monthly subscription on top too.Quote

Warchild
Quote:
Actually no because same trusted sellers will also sell Xbox codes to add. But yes, i am done paying directly from Steam etc. Its out of control, and the reason why I like Epic is stepping in. Still high cost, but its promoting competition.Quote
Reply