Ethereum mining is getting more difficult, with the value of the currency's value hitting a 50 day low of under $200 and miners reporting a new difficulty spike.

Today mining communities across the internet have reported a difficulty spike when mining, which is both hitting the value of the currency as some users sell their coin reserves while simultaneously making it more difficult to mine each new Ether coin. Right now reports are claiming that Ether is now 20% harder to mine.

While this bump in difficulty will not make Ether mining completely unprofitable, it will no doubt discourage people from investing in GPU-based currency mining, especially as additional difficulty spikes make mining even harder. That being said mining profitability depends on a lot more than mining difficulty, as the value of Ether and the electrical costs of running mining equipment also plays an important role. 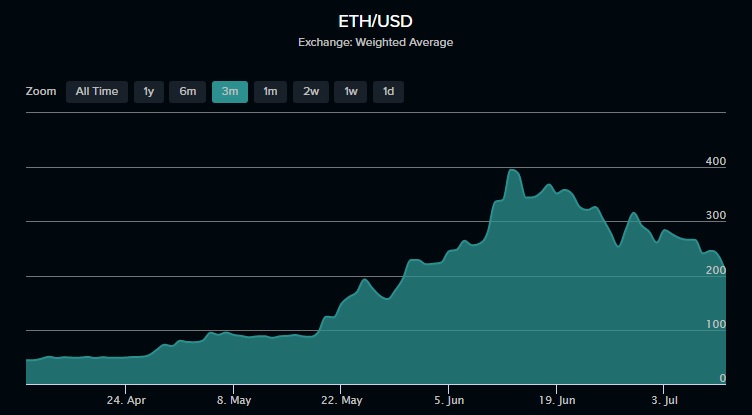 Right now mining communities across the web are filled with chatter of the incoming "end of mining", which is something that seems increasingly likely if the value of the currency does not stabilise and difficulty of mining continues to increase.

You can join the discussion on Ethereum's latest mining difficulty spike on the OC3D Forums.

wozza365
Glad I didn't invest into any hardware, just used what I had. I'm close to being able to withdraw my earnings. Will withdraw half to cover the electricity costs and let the other half ride. No loss if it crashes. But even after a similar situation with Bitcoin, it came back much stronger.Quote

NeverBackDown
Do the makers make it harder to mine or is it the result of overmining?Quote

wozza365
Quote:
I believe it's the natural progression built into the algorithm, as it gets more popular, it becomes harder to mine but also designed to become more valuable. Ethereum is more or less Bitcoin 2.0 since it is designed to learn from a lot of its mistakes.Quote

Korreborg
Quote:
Don't know the new stuff. But if it's like Bitcoins:
There are a set number of coins available, and the first coin i really easy. And it then gets harder and harder over time. And the more people mining, the faster it gets hard.
So the more hype, the more people gets burned, as if 1 person stats, it does not make a hole lot of difference. But when 100.000 starts, based on current expectations, and it suddenly gets a lot harder, people is going to have a hard time getting their return on investment.Quote
Reply