Epic is altering the deal, and Steam is praying that it isn't altered any further

Epic Games' Founder and CEO, Tim Sweeney, has publically bashed Steam on a number of occasions, stating that PC gaming's premiere storefront doesn't do enough to earn its cut a developer's revenue.

With the release of Fortnite on PC and Android, Sweeney has even gone so far as to create their Epic Games Launcher on PC (for Windows/MacOS) and avoid the Play Store on Android, allowing Epic Games to keep all of their game's revenue for themselves whenever possible.

Over the past five years, Epic Games has built tools that enable them to deliver their games directly to customers, with the success of Fortnite allowing them to create a world-class digital commerce ecosystem, which is capable of supporting a variety of payment methods at a massive scale. Moving forward, Epic Games wants to make this system available to 3rd party developers, even to those who do not use Epic Games' Unreal Engine 4.

A few days ago, Valve confirmed that their basic revenue sharing rate for their games is a 30:70 split between Valve/Steam and the game's developers. Epic Games promises to give developers their fair share of their game's revenue, only taking 12% to pay for their server costs and to generate a modest profit. On top of that, Unreal Engine 4 games will not be forced to pay their 5% royalty fee on sales on the Epic Games Store, with Epic taking this fee from their 12%.

Epic also plans to launch their store with a collection of hand-curated titles, making the store a considerable contrast to Steam's saturated shelves. In effect, Epic Games in creating the Steam that many of us want, free of the constant charge of sub-par releases while offering developers a great deal. 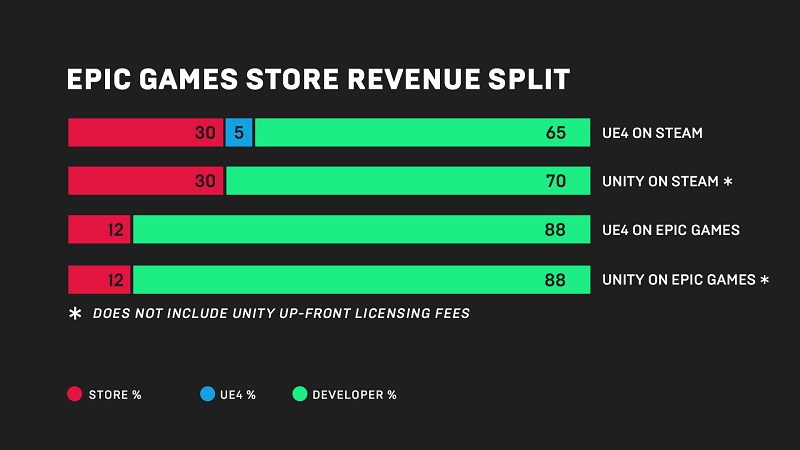 On top of this, Epic Games wants to get content creators involved in their storefront, allowing developers to share their revenue with Creators who (streamers bloggers etc) who refer players to their storefront. The revenue share amount will be up to the developer of each game, though Epic has stated that they will encourage the feature's adoption by covering the first 5% of the creator's revenue sharing costs for the first 24-months of the store's operation.

Epic Games has stated that more information about the storefront's upcoming game released will be revealed at The Game Awards on December 6th.

You can join the discussion on Epic Games Challenging Steam with their own gaming storefront on the OC3D Forums.

ImprovizoR
Great. I can't wait to register, install and keep track of yet another one of these. And of course, let's all hope that it never gets hacked and all of our info gets sold on dark web!Quote

NeverBackDown
I'd be more than happy to switch over than rely on steam. Steam support is f'ing awful and they don't give a rats butt about consumers. Plus with all the money being saved on the Epic storefront I see no reason why games won't be cheaperQuote

Greenback
Quote:
You should go on stage with that sort of Comedy routineQuote
Reply