Play the game up to three weeks before launch

EA's Anthem has quickly become one of the most highly anticipated releases of early 2019, with EA investing heavily in gameplay trailers while presenting the game at almost every major games show.

With a show of confidence, EA has reconfirmed that gamers will be able to play Anthem before its launch on February 22nd, granting gamers on PS4, Xbox One and PC the ability to play the game up to three weeks before its final release.

On February 15th, two weeks after the VIP demo, Origin Access Premier members will receive access to the full game, seven days before launch. Standard Origin Access and EA Access subscribers will also gain access to the game's 10-hour "Play First Trail" on this date, but game progression will be limited. Saves from this version of the game will carry over to the full game.

In Anthem, teams of up to four players can explore the game's dangerous world, using Javelin exosuits to combat the many creatures and hostile humans to occupy the landscape. Bioware promises a unique story with Anthem, hopefully overcoming the narrative issues that are often associated with MMO-lite multiplayer RPG-shooters, though this remains to be seen.

Anthem will offer gamers a solo-play option, though the game will remain an online-only title. Anthem is an always-online game and will lack loot boxes when it releases, though EA has confirmed that cosmetic and vanity items will be available for purchase. 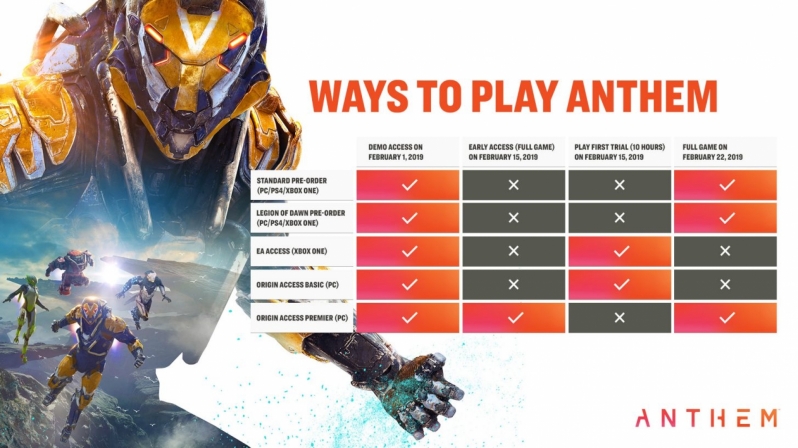 You can join the discussion on Anthem's Early Access and Demo plans on the OC3D Forums.

Peace Đ
Origin Access Basic is not the usual access you have, when you simply download and create an Origin account, right? Which leads me to the conclusion that there is no REAL demo...
EA at its best...Quote

NeverBackDown
A demo that cost money. Interesting. EA stooping so low they put a demo behind a paywallQuote

WYP
This is no different from pre-order only beta releases. EA needs to give Origin/EA Access users perks, as otherwise what is the point of the subscription.

Another way to look at it is that a month of Origin Access costs ÂŁ4.99, allowing gamers to use this demo or play the "Play First" 10-hour trail. If they like the game, they get a 10% discount on Origin which basically pays for their subscription (assuming that you don't buy the game from a 3rd party key selling site). If you don't like the game, there are plenty of good games that are accessible on Origin Access to try out before your month of access expires.

While a free demo would be nice, that isn't how EA has worked for a while now.Quote

Dicehunter
I hope they bring out a free demo after launch.Quote

NeverBackDown
Quote:
It's not been how Demos worked in forever. So the point is why should I pay for something that is free? That's like saying they should start charging for betas.Quote
Reply