Over three years after release, Civilization VI is still being supported with new content updates, Civilizations and more. Now that the game has arrived on consoles, Firaxis has greatly expanded its support plans to Civilization VI, revealing plans to release bi-monthly updates to the game, offering players access to new factions, game modes, districts and more.

Two of Civilization VI's leaders are transformed with a new look and new abilities when you lead America and France! “Rough Rider Teddy” excels at keeping the peace on his home continent, and “Magnificence Catherine” can use Luxuries to overwhelm the world with Culture and Tourism. Each Persona Pack contains a brand-new take on a favorite leader, with a new leader model and background, new gameplay bonuses, and an updated agenda that reflect the changes to the leader’s personality. The Persona Packs are available exclusively to owners of the New Frontier Pass and will be delivered with the second add-on pack.

In an interview with PCGamesN, Firaxis has confirmed that the studio has no plan to release the game's DLL source code to modders. This factor has prevented Civilization VI from getting the same variety of modded content as Civilization V, preventing modders from adding new features to the game or fixing bugs which prevent modded content from functioning correctly.

While it makes sense for Firaxis to keep this code under wraps, as popular mods could bring players away from Civilization VI's premium content, it remains disappointing that modders are getting less control than they did with older versions of Civilization. 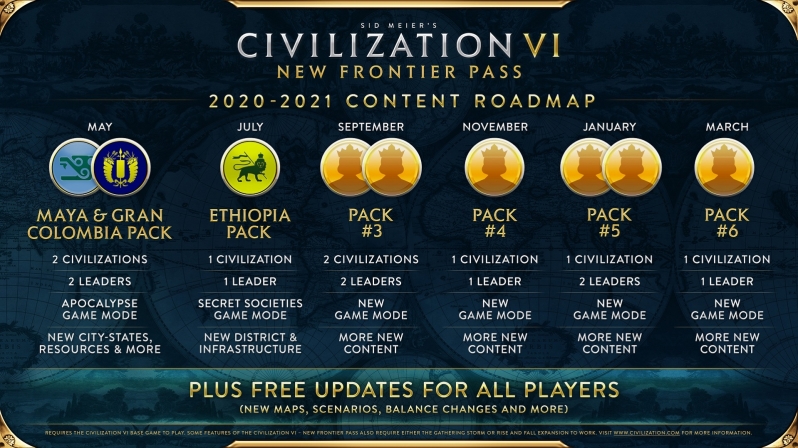 Most Civilization fans will be glad to see new content come to the game, especially those who are glad to see the Maya and Ethiopia return to the series. In addition to Civilization VI's six planned premium content drops, the game will also receive six free updates, which will deliver balance changes, and free content to all Civilization owners.

You can join the discussion on Civilization VI's "New Frontier" content pass on the OC3D Forums.

The content list sounds like Scenario packs, which currently 1 civ is £4 and 2 civ is £9, so the list is £34 worth so if the pass is £40 it's overpriced for what they currently charge for that content, my personal opinion would be to wait to see what packs 3-6 have and a sale if these new scenario packs are going to be overpriced compared to current packs.Quote

NeverBackDown
Tbh Civ 6 is just bad value all around. It's way too expensive in general and the steam reviews are just terrible. Civ V is still where it's at for many people.

I know Civ also has the stigma that the previous game is generally better for a while than the newest one, but to me that's just awful development and a poor excuse. If you need paid content to fix the game it's not a game worth playing imoQuote

looz
In my opinion Civ VI is fun, as is V, but both have similar bone-headed AI as their greatest detriment in single player games. VI was certainly the least broken CIV game out of the box, so the expansion's changes weren't quite as significant this time around.Quote

WYP
Quote:
Flipping cities with culture and natural disasters are pretty good additions. I do agree with you though, less significant that CIV V's expansions.

In base CIV V, navies couldn't take a city, making naval invasions terrible while giving coastal cities a huge advantage when it came to defence.

I like how CIV VI allows players to destroy districts and harm civilizations without takin cities. It allows weak players to take on stronger opponents by tactically taking down structures. If you don't have the might to take cities, you can do what you can to slow their production to a crawl. Guerilla tactics are a lot more effective.

What I love in CIV is the huge work map mods, where I can add in stupid numbers of civs and slowly grow a global empire. My problem with CIV VI is that these maps have become unstable after the release of Gathering Storm, and Firaxis has no plans to make this kind of gameplay stable again. They won't even give modders the same level of access as older CIV games, so modders can't even fix the bugs themselves. This has really killed CIV VI for me.Quote

Bartacus
I could never get into VI, and I tried multiple times. I just never could get a feel for the pace of a large game in VI, like I can with V. Something just feels off, Maybe I should be looking into some mods for V, that's an area I've never explored. But I cannot enjoy VI for the life of me.Quote
Reply