Have you read the hidden message?

CD Project Red, the creators of the Witcher 3, has released their first in-engine footage for Cyberpunk 2077, the developer's next big RPG experience. This trailer arrived at the end of Microsoft's E3 2018 Press Conference, after the event appeared to be hacked by an unknown party.

Sadly this trailer lacks any gameplay, setting the scene for upcoming action the RPG with spectacular visuals and a believable game world rather than what to expect from the title. The game was revealed with no firm release date, though the game is scheduled to release on PS4, Xbox One and PC at the same time.

CD Project Red has hidden a lot of additional information in their CyberPunk 2077 E3 trailer in the form of a hidden message. This massage states that the game will be released "when it's ready" and that the game will feature free DLC, offer post-launch expansion content and will come to PC DRM-free (assuming that is what the "DRM" message is alluding to in the hidden message).

Cyberpunk 2077 will also lack any form of microtransactions, with CD Project saying "Microtransactions? In a single player role-playing game" Are you nuts?". 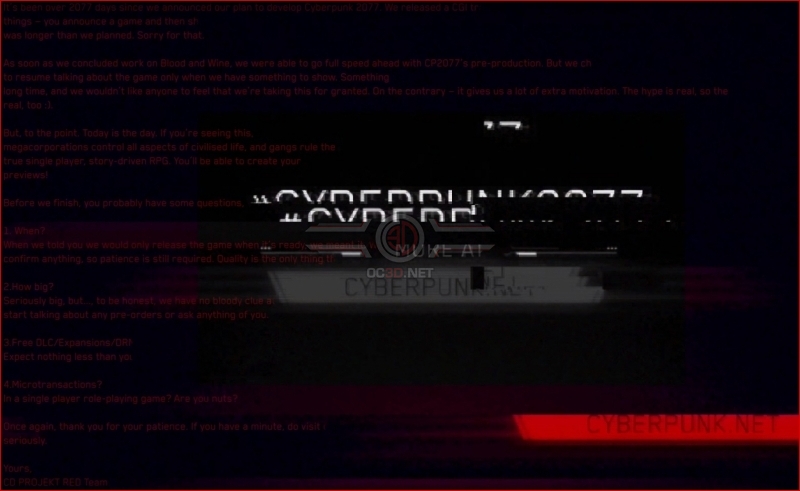 You can join the discussion on CD Projekt Red's E3 trailer for Cyberpunk 2077 on the OC3D Forums.

In the DOS screen when it starts streaming code they are actually 25 characters long... So if you go on Xbox and claim them they are in fact actually legit Witcher 3 Gold editions. Meaning base game and both expansions for free

They all are claimed by now..Quote

Daiyus
I can't help but feel excited for this. With CDPR's reputation and amazing setting this could well be as revolutionary as The Witcher 3 was.Quote

Warchild
Quote:
It has to be. They claimed the world would be far larger than W3 and also more packed. So no chance of open barren spaces.Quote

TheF34RChannel
This game gets me excited to the core!Quote

scubasteve
to many to spam up the reply section but some funny memes in the link for the game, personally cant wait to get my grubby little hands on it