Borderlands 3 will be pre-loadable on the Epic Games Store

Will you be pre-loading?

Borderlands 3 will be pre-loadable on the Epic Games Store

Gearbox has officially revealed the release times of Borderlands 3's PC version, confirming that the game will launch on September 12/13 worldwide. Furthermore, the company has confirmed that all versions of the game will be pre-loadable, including the PC version.

Previously, Epic Games' CEO Tim Sweeney stated that Borderlands 3 would not support pre-loading on the Epic Games Store. Since then, Gearbox has pushed to add support for game pre-loading to their title, allowing the game to be pre-loaded roughly 48 hours before its release.

Last week, Gearbox reconfirmed that the company will be working with AMD to optimise their game for both Ryzen and Radeon hardware. This partnership will bring DirectX 12 support to the game alongside support for FidelityFX. Below are the game's official PC system requirements. AMD has confirmed that Borderlands 3 will support FreeSync 2, FidelityFX, and Asynchronous Compute in DirectX 12 mode.

Below are the global release times for Borderlands 3's PC version. 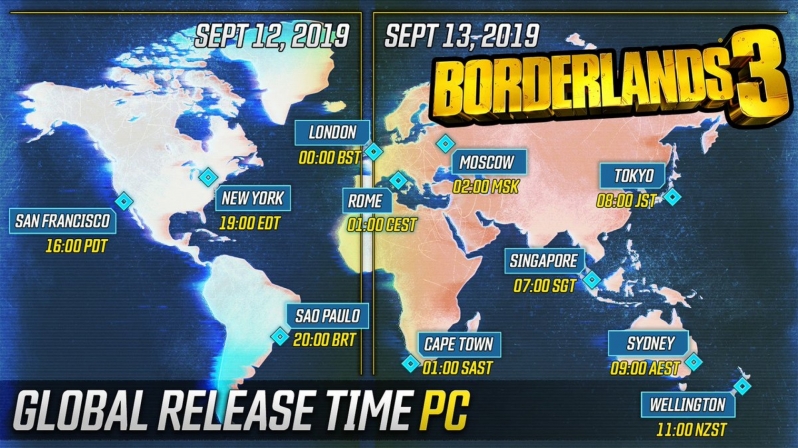 Below are all of the known graphics settings for Borderlands 3, which will offer PC gamers resolution scaling options, framerate cap options, FOV adjustment and support for a variety of options for graphics tweaking. Gearbox has stated that this is the "complete list" of visuals options that will be available to Borderlands 3 players.