Will this fix the game's DirectX 12 issues?

If you've read our Performance Analysis and Optimisation Guide for Borderlands 3, you would know that the game runs well on most systems, but is far from perfect on PC; especially with regards to CPU performance.

Gearbox has announced that Borderlands 3's upcoming November Patch will focus on performance, offering "game-wide" improvements to both performance and stability. Hopefully, this means that the game's early DirectX 12 issues will also be addressed.

This announcement came with the release of Borderlands 3's October patch, which adds a limited-time event called "Bloody Harvest" to the game. This new move is available from October 24th to December 5th. This patch also adds several bug fixes to the game as well as a photo mode to the game's console versions. Full patch notes are available to read here.

Below is what Gearbox has to say about Borderlands' planned November 2019 performance/stability update.

Game performance and stability continue to be our top priorities. The first fruits of that labor will be released in our upcoming November patch, with various improvements game-wide. We've also been hard at work improving the game's stability and more improvements in this regard are expected to be included in the November patch. Performance and stability will continue to be an ongoing effort with more fixes rolled out with each upcoming patch. 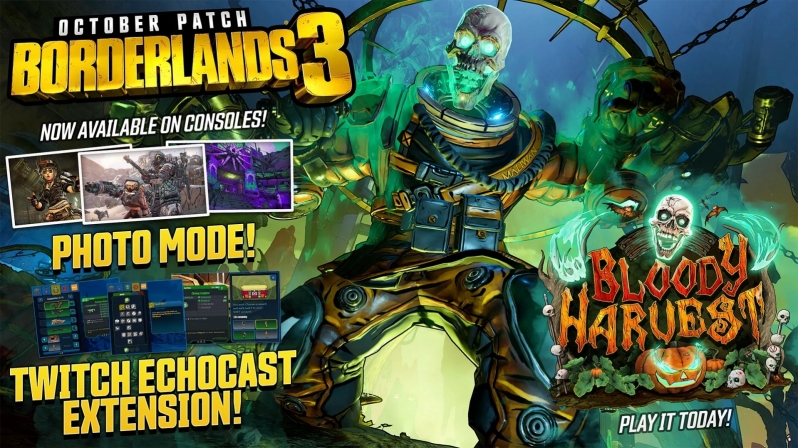 You can join the discussion on Borderlands 3's planned performance/stability update on the OC3D Forums.

AlienALX
Waiting for the £100 price tag.

Greenback
Quote:
Just have to wait for the private serverQuote

AlienALX
Quote:
The one that costs £100 a year and isn't actually private.Quote

Greenback
Quote:
But their community asked them for itQuote

AlienALX
Quote:
Haha bs. We wanted to host our own servers with our own sandbox and our own rules. Not to hire one controlled by them.

/Apologises for ot, but I'm super duper annoyed right now. I even have an entire pc of parts waiting to create my own private server, which as you can guess is rather depressing when you've been spat at in the face for a second time.Quote
Reply