Rumours about incoming Intel 8-core mainstream processors have been circulating for over a year now, with several Intel documents confirming that Intel is working on 8-core processors for both consumer desktop and Xeon products.

The big question that is on the lips of Intel fan is, will I need to upgrade my motherboard to use Intel's incoming 8-core processors? It is likely that Intel's 8-cores will have higher levels of power consumption than their 6-core or lower counterparts, spawning speculation that Intel's high core count processors would only be supported on premium Z390 motherboards.

Reports have started circulating which seem to indicate that Intel's 300-series BIOS' already offer support for 8-core processors, with an Anandtech poster called "dooon" posting screenshots which shows that both Z370 and H310 motherboards have hidden BIOS options that reference support for up to eight processing cores. Further verification of this came from a Reddit user called "eric98k" who found similar references in BIOS files from both ASRock and Gigabyte Z370 motherboards.

Strangely, if the same tests are used on Z270 motherboards, only four options are available, 1, 2, 3 and All, skipping 4. This omission makes sense as on Z370 "4 "and "All" mean the same thing on quad-core processors, whereas on Intel 300-series motherboards 1-8 and all are both mentioned explicitly. 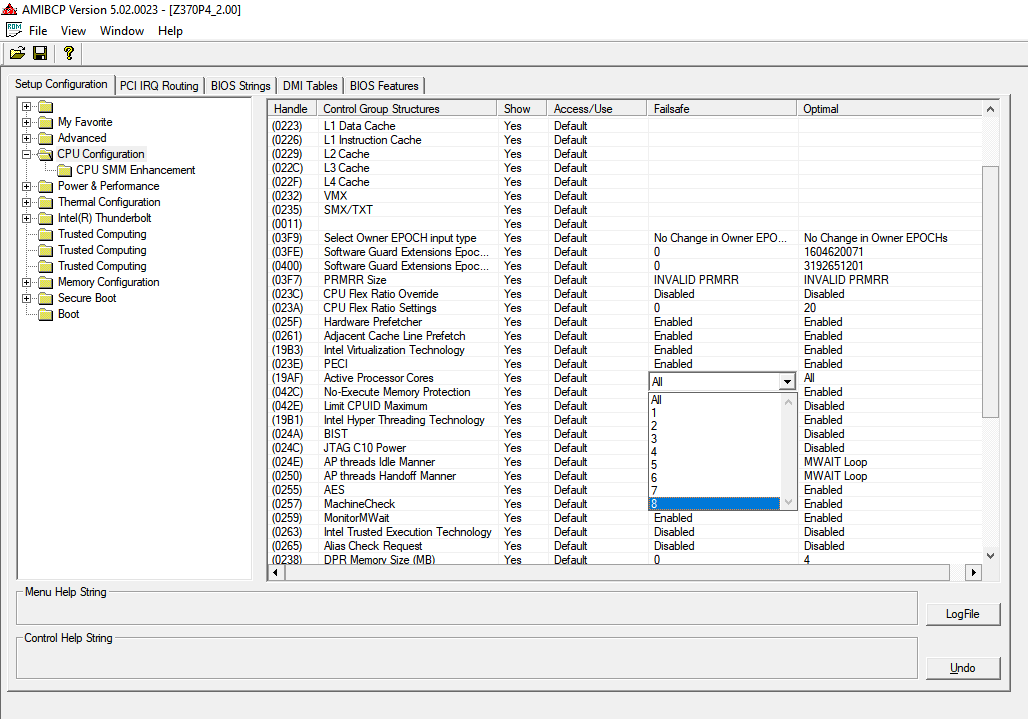 It would make sense for Intel's 300-series motherboards to support their upcoming 8-core processors, as typically every Intel socket supports two generations of processors. Z370 released in late 2017 with a somewhat modified LGA 1151 socket, which means that the platform should support at least one more series of processors before it is replaced.

With AMD's long-term support plans for AM4, Intel are also in a position where they will appear to be less consumer friendly than AMD if their current generation motherboards do not support their incoming 8-core processors, which are currently referred to as Coffee Lake Refresh or "Whiskey Lake" processors online.

You can join the discussion on Intel's 300-series motherboards featuring hidden options for 8-core processors on the OC3D Forums.

tolagarf
Interesting. I read some other article earlier today (I forgot the source, sorry) that the Z390 chipset might be dropped and the Z370 could just be 'silently' upgraded with the difference between the two. Not sure if there's any truth to that, but Z390 is starting to look pointless by now.Quote

demonking
If they do go with a new socket/chipset then the only thing I think they will be able to market is that they now support 8 cores.
I don't know how they will sell this tbh, for the first time in a while AMD has managed to land a few hits and this will be another thing to troll intel on, We've had 8 core support for years. Intel might carry on the way they are and potentially lose a bit of the market to AMD or they might decide to change their game and stop relying on AIB licence fees as a strong source of income.Quote
Reply