This game has five different options for AA alone!

From a PC hardware perspective Wolfenstein II: The New Colossus is easily one of the most highly anticipated released coming to PC this year, with the game being built on the same idTech 6 engine used to power DOOM (2016) and come with support for the Vulkan API at launch.

The PC version of this game will also come with support for several advanced features like FoV adjustment, colourblind options (protanopia, deuteranopia and tritanopia) as well as fixes for some of the technical issues that were present in Wolfenstein: The New Order.

Below is a small list of some of the graphical options that will be available within the game, though standard features like texture settings and an unlocked framerate are already included. The game also includes five different AA options for the game, which include TAA, FXAA, SMAA, TSSAA and more. 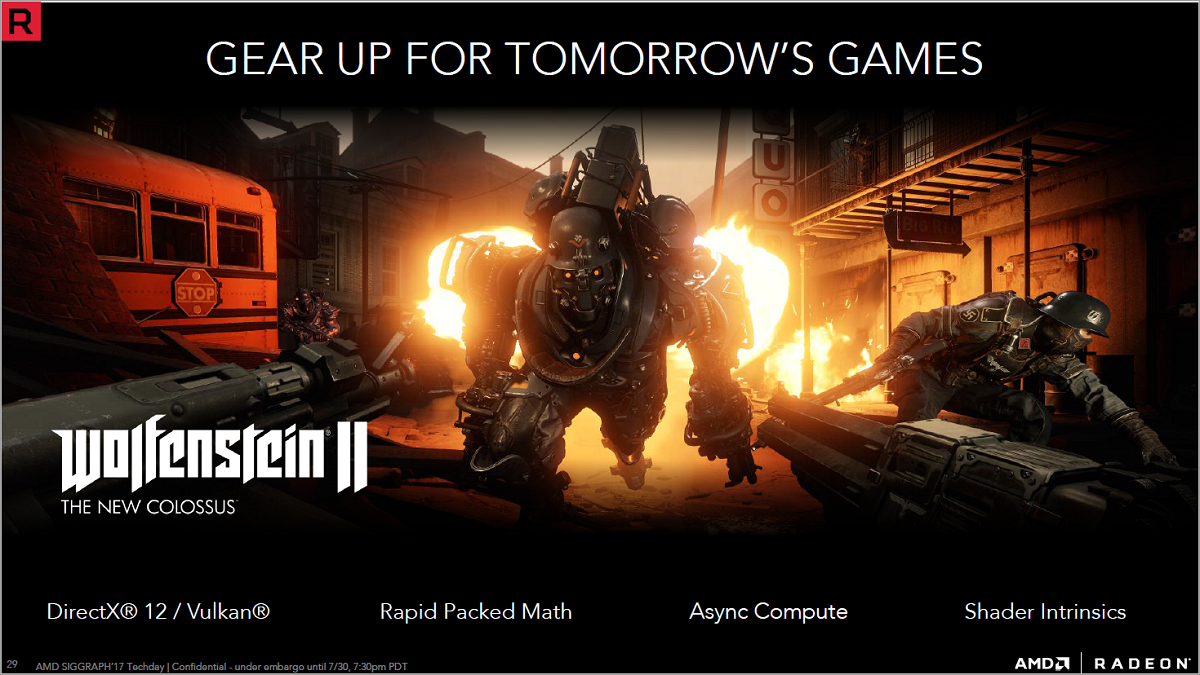 Curiously, there has been no mention of Rapid Packed Math support within the PC version of the game, which is odd given the above slide from AMD from Siggraph 2017. This suggests that Wolfenstein II will not release with support for this feature on PC.

Rapid Packed Math is a new feature that allows certain graphical aspects of the game to be rendered using FP16 compute rather than standard FP32 compute, allowing these tasks to be completed up to 2x faster than before, freeing up more compute resources for other tasks. Developers need to design games with this feature in mind, as only certain workloads can be moved to this lower-precision form of compute without any visual or computational downsides.

Right now "Rapid Packed Math" is only supported on AMD's Vega GPU architecture on PC, though the feature is already available on Sony's PS4 Pro console.

PC Gamer has recently been given Wolfenstein II: The New Colossus' PC system requirements, though for now these should only be used as a guideline, as placing an R9 290 4GB as a game's minimum GPU requirement beside a Nvidia GTX 770 is nothing short of suspicious. These requirements are not available on the game's Steam page yet, we will update this article once this happens to clarify this oddity.

The minimum hardware requirements are set to ensure a high-quality experience, and with Vulkan players should see solid performance on a variety of system configurations. However, if you’re aiming for 1080p with high framerate and settings, you would need to bump towards our recommended specs.

Update - Nvidia has listed the following as the game's minimum PC system requirements, adding further confusion to this matter.

Wolfenstein II: The New Colossus will release on PC on October 27th alongside console versions for the PS4 and Xbox One.

You can join the discussion on Wolfenstein II: The New Colossus' PC system requirements on the OC3D Forums.

Kourgath223
Quote:
If I give Bethesda the benefit of the doubt my assumption would be that the 470 has some feature(s) that the 290 lacks that the game can take advantage of resulting in the 470 being better then the 290 in this case, but I honestly don't know enough about the hardware of each of them to say with any certainty. Otherwise Bethesda is BSing us with these requirements and just assumed that since 470 is a larger number then 290 that it must be better.Quote

ImprovizoR
Maybe they were drunk when they wrote this. Nvidia's minimum requirements seem a lot more probable, considering how the game looks and the fact that it uses Vulkan.Quote

AngryGoldfish
Quote:
It's definitely possible the engine has been tweaked to support Polaris and Vega-specific features, but there's no way the difference would be that huge. Going from 1080p High to 720p Low is massive in any game. You're talking over double the frame rates, which means the RX 470 is over twice as fast an R9 290, which is ludicrous.Quote
Reply