A Thunderbolt card for Intel's Z490 and H470 chipsets

With Comet Lake and their 400-series motherboard lineup, Intel wanted to push Thunderbolt 3 further into the limelight by allowing a wider range of motherboards to support the standard. This came in the form of direct integration into high-end Z490 and H470 motherboard models, or as an expansion option using a TB3 motherboard header.

Thunderbolt 3 offers users up to 40Gbps of bandwidth and up to 100W of power, making the standard useful for charging devices, transferring data at high speeds, enable external PCIe connectivity to graphics cards, or to act as a high-bandwidth display cabling option.

To meet the needs of users, ASUS has created their ThunderboltEX 3-TR expansion card, which allows users to add two Thunderbolt 3.0 ports to compatible motherboards. This card also offers DisplayPort Passthrough, which is a useful feature when using Thunderbolt displays.

On Amazon US, this controller is available for $89.99, making this an expensive add-on for most users. That said, nothing with Thunderbolt in the name comes cheap. There's a reason why so many motherboards ship with TB3 internal headers and no Thunderbolt ports. 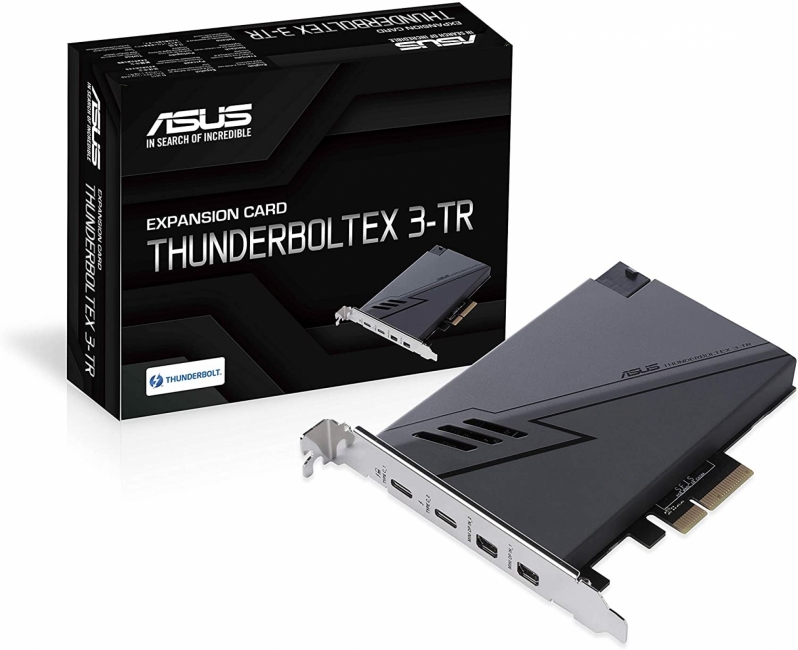 You can join the discussion on ASUS' ThunderboltEX 3-TR Expansion card on the OC3D Forums.

FTLN
Not only for Intel, some of Asus's new B550 boards also have thunderbolt header for compatibility with Titatn Ridge cards : https://edgeup.asus.com/2020/b550-mo...-gaming-prime/Quote

NeverBackDown
All of them do except for the Mini-ITX and Micro-ATX B550 boards. I am not sure which headers they are though, their online manuals I could not find on their US site. But they do specifically advertise the header in the spec sheet here.