Will the same trend continue in the 2020s?

Back in 2014, AMD announced that the company was targetting a '25x20' goal, which would see AMD's mobile processors receive a 25x power efficiency increase by the end of 2020.

Today, AMD has announced that they have smashed this target, delivering a 31.7x efficiency increase. This achievement was only possible thanks to AMD's early adoption of leading-edge process tech, a focus on enhancing their CPU and graphics architectures and designing their processors to deliver low idle power consumption levels.

AMD was able to exceed their efficiency targets that that achievement should be applauded. Moving forward, it will be exciting to see what AMD has planned, and how much the efficiency of their processors will grow in the meantime.

Below is what AMD has to say about achieving its 2020 efficiency targets;

Energy efficiency for processors is determined by the amount of work performed per unit of energy consumed. To achieve the 25x20 goal, AMD focused improvements on developing a highly integrated and efficient system-on-chip (SoC) architecture; improved, real-time power management features; and silicon-level power optimizations. AMD reduced average compute time for a given task by 80% from 2014 to 2020, while also achieving an 84% reduction in energy use.3 That means an enterprise that upgrades 50,000 AMD laptops from 2014 models to 2020 models would achieve five times more computing performance and reduce associated laptop energy consumption by 84%, which over a three-year service life amounts to saving approximately 1.4 million kilowatt hours of electricity and 971,000 kg of carbon emissions, equal to 16,000 trees grown for 10 years.

Achieving its 25x20 energy efficiency goal not only delivers a stronger user experience but also further solidifies AMD’s leadership in sustainability. AMD was the first semiconductor company to have its climate protection goals, including 25x20, approved as a “science-based target” by the Science Based Targets initiative  — deemed aggressive enough to help mitigate the impacts of computing on climate change. 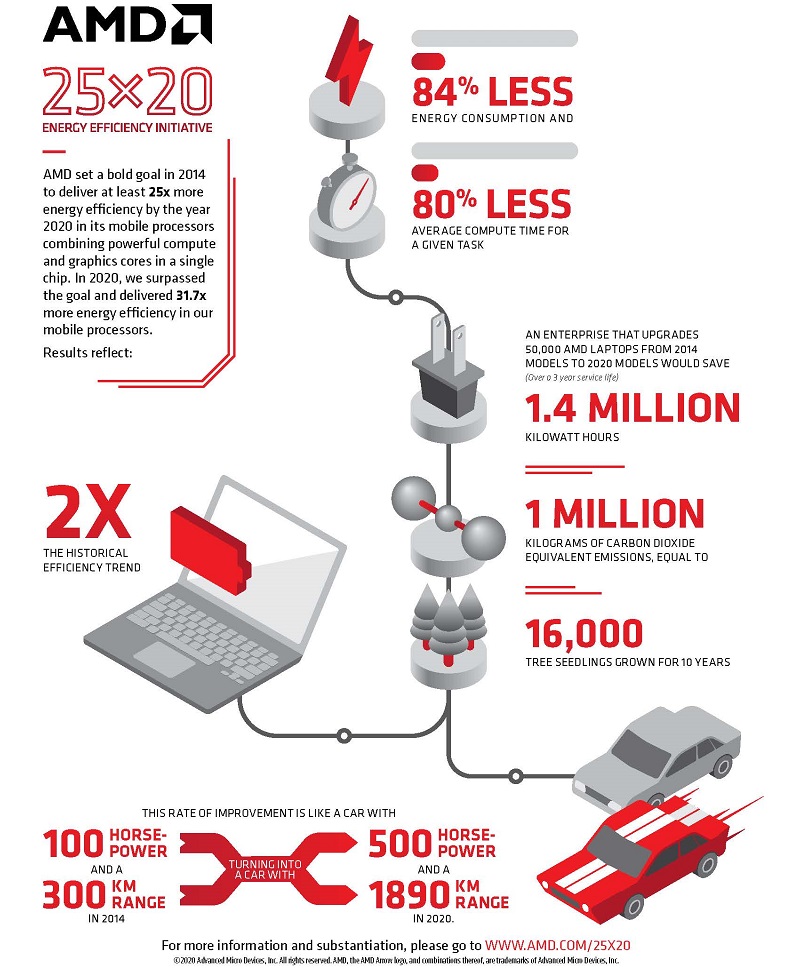 You can join the discussion on AMD hitting its 25x20 power efficiency targets on the OC3D Forums.

NeverBackDown
Now if only we could get some Navi/RDNA based graphics in their APUs for even better efficiency.Quote
Reply