AMD's memory speeds are linked to Ryzen's Infinity Fabric Clock (fclk), memory controller clocks (uclk), a fact which makes faster DDR4 memory beneficial for AMD's Ryzen architectures for several reasons. In the slide below, which comes via WCCFTECH, AMD claims that 4,000 MHz is the new 3,800 MHz, a fact which means that Ryzen 5,000 series users should be able to use faster DDR5 memory while maintaining a 1:1:1 relationship between Infinity Fabric, Memory Controller and Memory frequencies.

While the silicon lottery will always apply when it comes to the capabilities of a specific processor's memory controller, AMD has designated 4,000MHz DDR4 memory as Ryzen's new sweet spot. This change means that Ryzen users who are looking for the fastest possible performance should be looking for low latency 4,000MHz DDR4 memory kits for their Ryzen 5000 series processors. 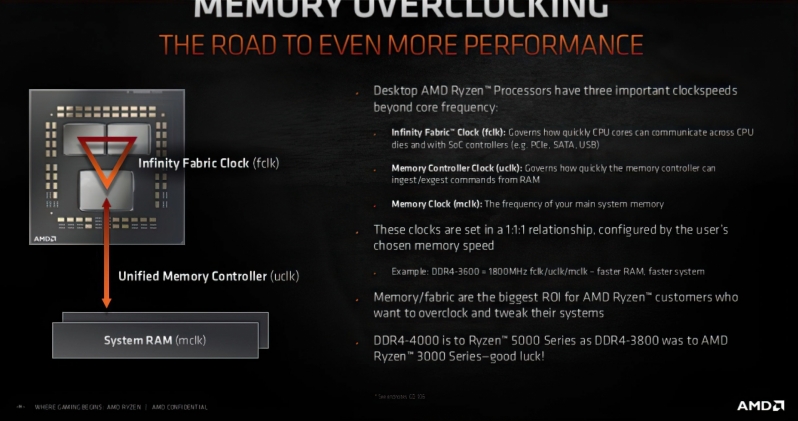 With Zen 3's radical core redesigns, the impact of memory speed will likely be lessened with Ryzen 5000 series processors when compared to prior Ryzen CPU generation. Even so, faster, less latent memory will undoubtedly result in notable performance increased in some applications, especially those which are bandwidth-heavy or latency-sensitive.

You can join the discussion on AMD's Ryzen 5000 series memory "sweet spot" on the OC3D Forums.

robbiec
This is interesting news as the I/O die was seemingly unchanged if you read by the official presentation and that handles the Infinity Fabric? So its speculated that the upper tier is now 2000Mhz instead of 1800Mhz for Fclk and 4000 for Mclk - all helps I suppose. Samsung B-Dies go to 4000?Quote

Which is probably why it has "good luck" written at the bottom. Yeah, you'll friggin need it ffs.Quote