These CPUs are a lot like their bigger brothers

Earlier this week, AMD revealed their Ryzen 3 3100 and Ryzen 3 3300X processors, both of which are due to revolutionise AMD's low-end product stack by delivering users four cores and eight threads at affordable prices.

Today, Hardware Luxx has released a slide which details the core topology of AMD's new Ryzen 3 processors, confirming that there are a lot of under-the-hood differences between AMD's 3100 and 3300X models than we first expected. The email plastered on these slides reveal who the source of this leak is, so AMD should have no trouble finding out how this slide made it to the tech press.

Based on the slide below, AMD's Ryzen 3 3100 and 3300X both use the same core and I/O dies as AMD's other Zen 2-powered Ryzen 3000 series processors. Both use a single 7nm CPU die with four cores active, with the 3100 splitting these two cores across two CCXs while the 3300X has all of its cores in a single CCX.

While both processors technically feature four cores and 16MB of L3 cache, the Ryzen 3 3300X has the advantage of having it all within a single CCX. With the 3300X, everything is in one place, and no data needs to be transferred between two sets of cores and caches. This factor will give the 3300X a latency advantage, making it the superior processor, even without considering the chip's clock speed advantages.

Below are the specifications of AMD's Ryzen 3000 series of Zen 2 processors. 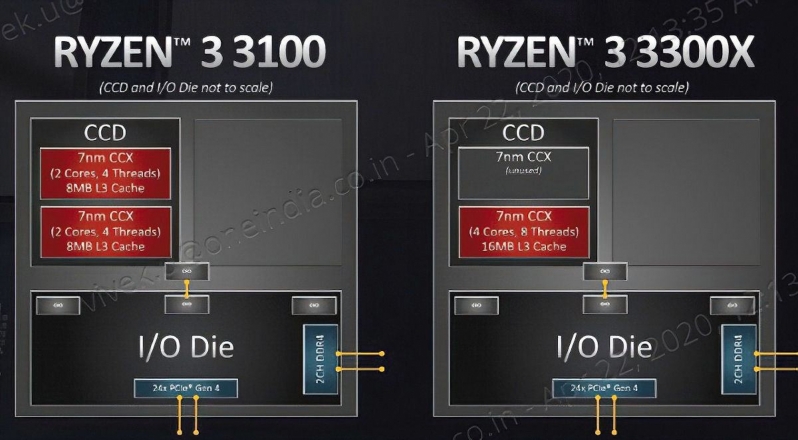 You can join the discussion on AMD's Ryzen 3100/3300X core topology on the OC3D Forums.

NeverBackDown
Get what you pay for I guess. Worth the extra $20 in real world performance? Maybe in certain situations. Would be an interesting benchmark session that's for sure.Quote

FTLN
I can see a bit of disabled core unlocking via a a leaked MSI bios coming round the corner.