Unlike normal image sharpening techniques, AMD's Contrast Adaptive Sharpening tool allows games to be sharpened in areas where the effect is noticeable and avoid areas where so-called "over-sharpening "artefacts" can emerge. This allows AMD to produce higher quality images using its FidelityFX toolset without generating any performance or visual downsides. In our eyes, AMD's FidelityFX Contrast Adaptive Sharpening tools are a huge win for developers.

In titles like Shadow of the Tomb Raider, CAS allows subtle details to become more noticeable, allowing the artwork of game developers to be better appreciated. The same effects will hold true with EVE Online, where CCP Games says that moon surfaces, ship hulls and other details will become more visible. Better still is the fact that FidelityFX CAS will have a "negligible" impact on game performance.

CCP Games has also confirmed that FidelityFX is due to arrive in EVE Online later today with a new game patch, so EVE players will soon be able to enjoy what amounts to a free graphics upgrade. 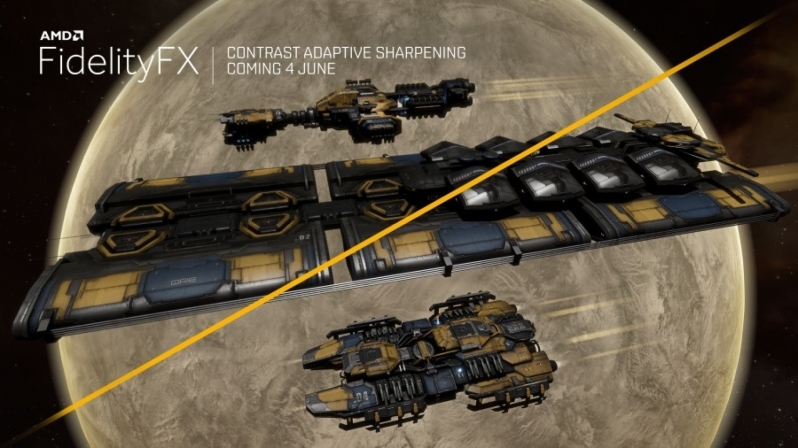 The future of EVE Online

EVE Online is currently transitioning to DirectX 12, an API which will give CCP Games more options when it comes to improving the game's performance and visuals. Right now, CCP Games plans to sunset DirectX 9 and EVE Online's 32-bit version with the release of the game's new DirectX 12 version.

DirectX 12 is said to offer EVE's creators "a huge increase in bandwidth to utilize more modern advances in graphics technology to continue to make New Eden more stunning than ever before." With DirectX 12, EVE's developers can explore DirectX Raytracing and other new feature which can help improve the game's visuals.

At this time, it is unknown when EVE Online will transition to DirectX 12.

You can join the discussion on AMD's FidelityFX Sharpening is coming to EVE Online on the OC3D Forums.

NeverBackDown
It's great they are making strides into performance and graphics but their biggest issue is server related. Once big battles happen they slow down the servers by 10x and it takes 10 seconds per 1 frame essentially.Quote

Dicehunter
Space themed spread sheet is getting better visuals, Whoop, Would be cool if they added it to games like WoW, ED etc...Quote

WYP
Quote:
Well, that's the thing with AMD's FidelityFX stuff. Any developer can use it with relative ease. If they think it is worth implementing, they can add it.

If you want your favourite game to add it, post something about it to their social media people etc. TBH, I haven't seen a game yet where AMD's CAS has been implemented badly.Quote
Reply