This next-generation APU is a powerhouse

It looks like AMD plans to release Renoir onto their AM4 socket, and with it will come support for eight cores, sixteen threads and 7nm Radeon Vega graphics, creating the most powerful Ryzen series APU to date.

Before now, AMD's fastest desktop APU (CPU with integrated graphics), was the Ryzen 5 3400G, a four-core eight-thread processor with eleven Vega compute units that are clocked at 1400MHz. Typically, gamers can overclock this unit's graphics card to reach 1600MHz to 1700MHz with relative ease, though clock beyond that are difficult to maintain.

Videocardz has released the first image of AMD's Ryzen 7 4700G, and igor'sLab has released the CPU's specifications. This APU will deliver gamers eight cores, sixteen threads and base/boost clock speeds of 3.6GHz and 4.4GHz, delivering a huge performance boost over AMD's Ryzen 5 3400G. Combine this with AMD's use of Zen 2 CPU cores, and we have a huge performance advantage on our hands.

If these reported clock speeds are true, this is a good sign for RDNA 2 based graphics cards. AMD's Enhanced Vega CUs in its 7nm Renoir silicon contain power-focused design changes that are due to make it into future Radeon products. RDNA 2 already promises users a 50% increase in power efficiency over RDNA, suggesting that these design changes are present within RDNA 2. The Ryzen 7 4700G's clock speeds also hint at RDNA 2 clock speeds that exceed 2GHz.

Zen 3 based processors from AMD are due to be released later this year, which means that it is likely that AMD's Zen 2-based Ryzen 7 4000 series APUs (CPUs with integrated graphics) will release within the next few quarters. 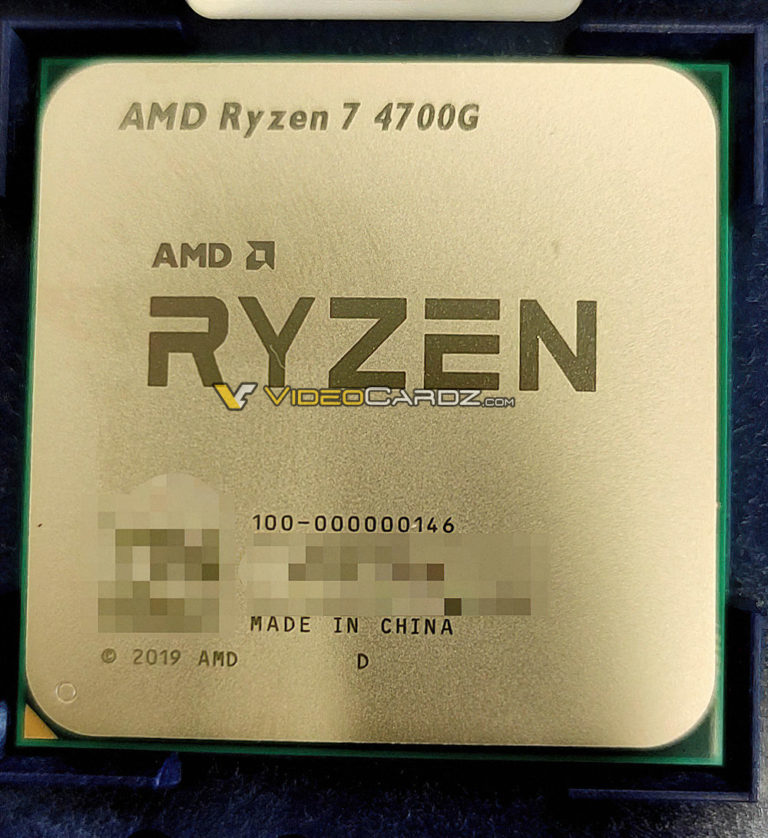 You can join the discussion on AMD's Renoir Ryzen 7 4700G processor on the OC3D Forums.

RobM
Wow that is very impressive if true.Quote

WYP
One point that's worth noting is that this will have less cache than a 3700X, but that may be countered by the CPU's different Infinity Fabric layout and the fact it is a monolithic die.

Hard to know how AMD will price this, as it is a larger 7nm chip than the 3700X. has an iGPU but also has less IO capabilities.Quote

Giggyolly
I'm super interested to see how performance of Renoir scales with the additional power headroom of being on desktop!Quote

WYP
Quote:
Well, the clocks on the GPU alone appear to be getting a huge boost. Will need to wait for AMD to officially reveal this part though.Quote
Reply