Some fresh information about Big Navi's power consumption has dropped thanks to the efforts of Igor Wallossek, revealing the power consumption and memory specifications of AMD's upcoming RDNA 2 powered Navi21 XT and Navi21 XL graphics cards.

According to Wallossek, availability for AMD's Navi 21 graphics cards will start in mid-November, only a few weeks after AMD's RDNA 2 launch on October 28th. Custom models from AMD's AIB partners should release in November, with AMD using PCB designs which are similar to existing Navi graphics cards to allow their AIB partners to reuse the design aspects of their existing Radeon offerings.

In terms of power consumption, AMD's Navi21 XT GPU is said to use 320W of total board power, making the GPU similar to Nvidia's RTX 3080. Custom Navi21 XL GPUs could consume as much as 355W, depending on how aggressive AMD's AIB partners are. Early reports of Navi21 XT consuming 235W of power are inaccurate, as this rating refers to GPU power, and not total board power.

AMD is due to reveal more about its Radeon RX 6000 series of graphics cards on October 28th, unveiling exact specifications for AMD's GPU lineup while also delivering true performance numbers for their RDNA 2 product line.

You can join the discussion on AMD's Radeon RX 6000 series of graphics cards on the OC3D Forums. 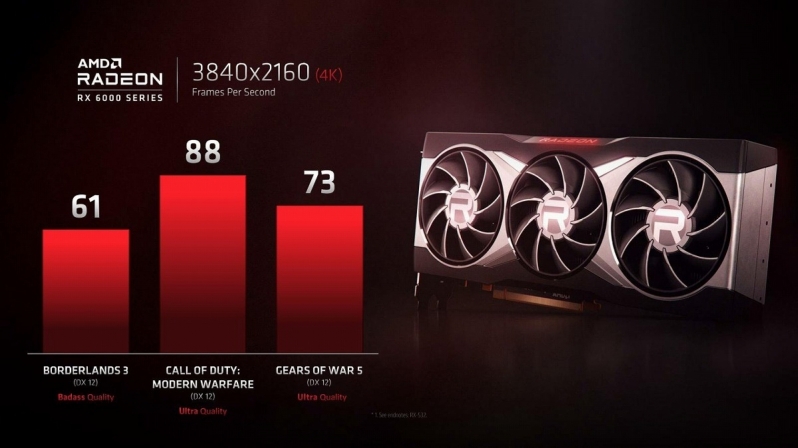 AngryGoldfish
That initial power rating did seem a bit too good to be true. And it would seem unnecessary to invest in a large cooler for a 220-250W card when a more compact (and cheaper) two-slot dual fan design would have been adequate, as the Power Color Dragon 5700 XT testifies to.

It's looking more and more likely that AMD's top tier card from AIB partners will surpass a 3080, at least in some titles.Quote

tgrech
Quote:
It would currently half their possible memory capacity(Without huge expensive PCBs), and cost more ofc, when one of Navi2's key competitive points seems to be its ability to reduce end cost by requiring lower memory bus bit widths(And also therefore fewer memory chips) to achieve a given effective bandwidth.

Would make more sense when manufacturers have 16Gb/2GB GDDR6X chips ready, but whether or not it will deliver enough gains for them tto consider the cost worthwhile for a refresh or something is still to be found out I guess.Quote

AngryGoldfish
Also, Nvidia is said to have bought all the GDDR6X stock.Quote

AlienALX
I don't think GDDR6X is necessary on a gaming card.

The 20 series does fine without it. It would just jack costs up even more and jack up the power use too.

Also I have a feeling that once again this should have been a low wattage card, but due to Nvidia's pre emptive strike and known performance AMD have cranked on the card again. Which they probably would have done regardless, as no one leaves anything in the tank now.

Hopefully they will be easier to get blocks for.Quote
Reply