During the company's Q1 2020 earnings call, AMD's CEO, Lisa Su, confirmed that the company's Zen 3 and RDNA 2 architectures were both due to launch in late 2020, ushering in the next generation of EPYC, Ryzen and Radeon products.

AMD's Zen 2 and RDNA architectures have already proven to be incredibly popular additions to AMD's product stack, and their next-generation counterparts are due to push things even further.

The CPU and graphics markets have already been transformed by AMD's latest products, with Zen 2 transforming the desktop, mobile and enterprise CPU markets while RDNA has delivered real competition to Nvidia for the first time in half a decade. Based on what we know so far, Zen 3 and RDNA 2 will continue AMD's upward trend, especially within the GPU market.

At this time, AMD's launch plans for Zen 3/RDNA 2 remain unclear. "Late 2020" is an ambiguous phrase, and could refer to dates as early as September and as late as November or December. Right now, it looks like AMD is keeping its options open when it comes to Zen 3/RDNA 2's release plans, which makes sense given today's economic climate.

Performance-wise, RDNA 2 will be a transformative architecture for team Radeon. AMD has already promised a 50% performance-per-watt advantage over RDNA 2, and those power savings can be used to achieve higher clock speeds or to power additional GPU logic. This change will also make Radeon graphics cards more viable within mobile systems, opening up a new market to Radeon graphics products.

RDNA 2 is due to be just as transformative as AMD's Zen 2 architecture was on desktop, offering users significant performance/ efficiency gains while also offering users new features. Full DirectX 12 Ultimate support will also place Radeon into a strong position, especially given RDNA 2's use within both Sony's PlayStation 5 and Microsoft's Xbox Series X. 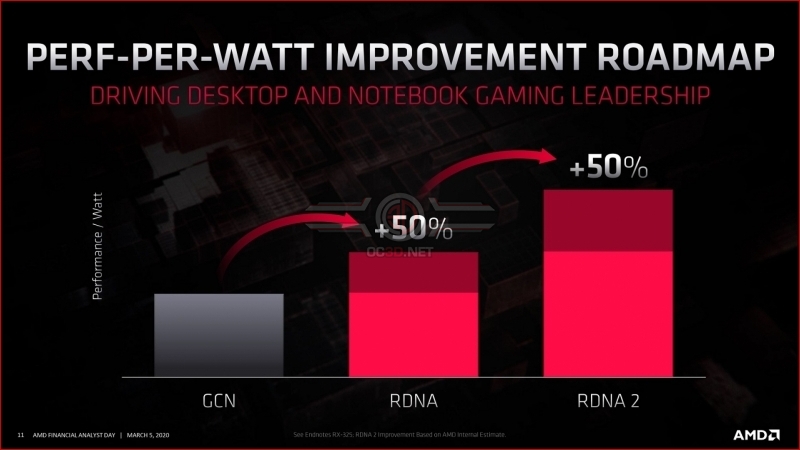 Late 2020 is going to be a very interesting time for AMD. This time is when we will see the company release its first RDNA 2 and Zen 3 products while gamers start to see their technology power the first next-generation games on Xbox Series X and PlayStation 5.

You can join the discussion on AMD's plans to release Zen 3 and RDNA 2 products in late 2020 on the OC3D Forums.

NeverBackDown
Going to be an expensive Q4... New CPUs, GPUs, a bunch of monitors are launching, and new consoles.Quote

grassman
Wow Nvidia will end up releasing new products before them how embarrassing, They will have last generation performance again, They will never catch up now because of the ass that wanted to turn AMD into a ing casino machine company.Quote

Dawelio
Quote:
The idea of AMD actually catching up to Nvidia, like they did with Ryzen and Intel, is a bit of a dream to be honest. They were lucky with Ryzen, but competing with Nvidia is something else.Quote

tgrech
Worth remembering NVidia is a much smaller company than Intel, in fact with AMD's recent growth and spending increases, they're not too far off NVidia now in terms of employees and R&D expenditure. Of course AMD also make CPUs with those resources, though NVidia have branched out a lot themselves. But it does seem like the days of AMD having an underfunded GPU department, as was undeniably the case since Piledriver to now, are over. And it would only be sensible to expect that to bear fruit at some point.Quote

AlienALX
Quote:
They don't need to catch up. That was their biggest mistake ever, trying to compete with a company with twenty times the cash they have. It was a bad idea.

They just need to make something that sells.

Nvidia don't make their cash on high end sales. Most of it comes from mid and low tier products and deals with OEMs (laptops etc).

Many people say that the 2080Ti is too expensive. It is, however, it offers enormous performance. If AMD can match that? I can promise you no one will need more than that for a very long time. They don't need to try and beat Nvidia. All that will happen is what has already happened. They will make big old tank GPUs with no overclocking headroom left in the tank and still lose looking like idiots at the same time.

That made people turn their head. Then with 2000 and 3000? yeah, now people are really starting to pay attention. Had AMD released Zen at Intel prices they would have been laughed at. Pah ! 4ghz max? but it was the value in those products.

That's what people don't understand about the 470 and 480. They thought AMD were trying to compete. No, not at all. They were trying to make targeted products that sell. And to that ends it was a complete success.Quote
Reply