AMD's Zen 2 series of processors will soon be upon us, bringing with them higher core counts, heightened efficiency and increased IPC. Moving forward, AMD plans to continue to innovate within the CPU market, with plans to release "Zen 3" processors in mid-2020 with their "Milan" server parts.

With Zen 2 "Rome" processors, AMD plans to up their DDR4 memory support from 2666MHz to an unknown higher speed, which AMD's Forrest Norrod stating that "you do get more than DDR4-2666" in a recent interview with Anandtech.

In this interview, AMD's Forrest Norrod also confirmed that their Zen 3 "Milan" processors would support the SP3 server socket, which is the same as what's currently used for the company's EPYC and EPYC 2nd Generation processors, confirming that "Milan" will also support DDR4 memory.

"DDR5 is a different design," and as such it will require a new CPU socket from AMD. With Milan supporting DDR4 and the same SP3 socket as today's EPYC processors, it seems likely that AMD's Zen 3 desktop processors will also continue to utilise DDR4 memory. 2020's Ryzen 4th Generation processors are likely to be the last AMD CPUs to use DDR4 memory.

AMD has already committed to utilising a "7nm+" manufacturing process to create their next-generation Ryzen and EPYC series CPUs, with Zen 3 aiming to remove for "asterisks" from the company's processor designs. With each new Zen architecture, AMD plans to eliminate more shortcomings within their designs, hoping to eliminate all of Intel's performance advantages over time to deliver "IPC (or better) parity across all workloads." 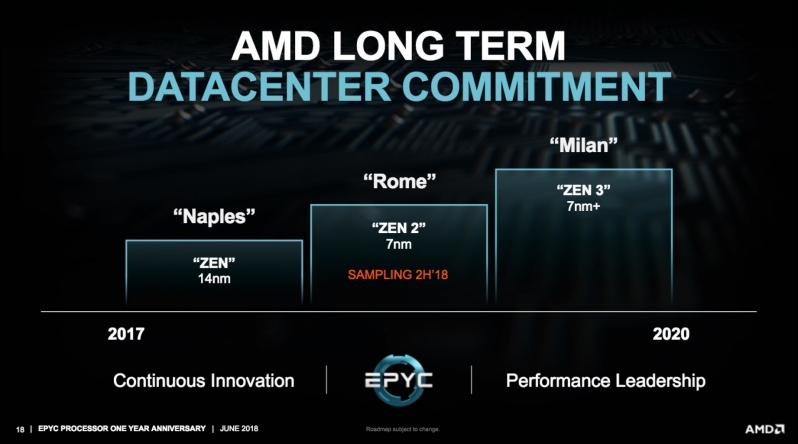 You can join the discussion on AMD's Zen 3 Milan series processors using DDR4 memory on the OC3D Forums.

grec
I guess this is also inadvertently conformation that AM4 will go at least until Zen3.Quote
Reply