AMD bundles Godfall and World of Warcraft: Shadowlands with its latest Radeon GPUs

AMD bundles Godfall and World of Warcraft: Shadowlands with its latest GPUs

AMD has just revealed its latest games/hardware bundle, and it promises to "raise the game" for new Radeon purchasers by offering new RX 5000 series buyers free copies of Godfall and World of Warcraft: Shadowlands.

AMD's new Raise the Game bundle will be applied to all new Radeon RX 5000 series graphics cards purchased between July 14th and October 3rd, assuming these graphics cards come from participating retailers. This bundle could end prematurely if AMD exhausts its supply of game codes, though this rarely happens with these game bundles.

Godfall if Gearbox's upcoming Looter-Slasher, a title which will release on both PC and PlayStation 5 later this year. This game will be a Borderlands-style game with what appears to be 3rd person melee combat. More information will become available as Godfall approaches its release this fall.

World of Warcraft: Shadowlands barely needs an introduction, it's the latest expansion for the world's most popular MMO. Within this expansion, players will enter the world of the afterlife, uncovering many of the mysteries which were left after the game's Battle for Azeroth expansion. With World of Warcraft's recent focus on engine improvements, PC gamers are hopeful that the MMO will look and run better than ever on modern gaming PCs when Shadowlands launches later this year.

You can read the terms and conditions of AMD's latest Raise the Game Bundle here. 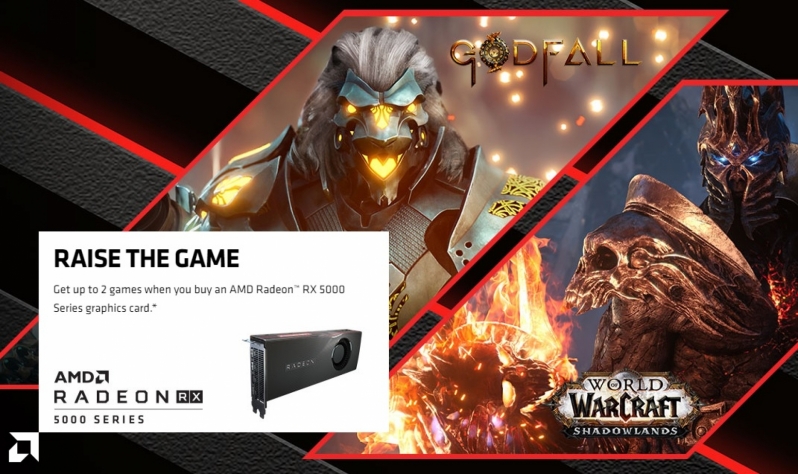 You can join the discussion on AMD's latest "Raise the Game" bundle on the OC3D Forums.