Windows 10 has already proven to be the most popular Windows OS to date, receiving unprecedented levels of adoption due to Microsoft's Free Upgrade to existing Windows 7 and 8 users.

Right now Windows 10 64-bit is gaining a significant lead over Windows 7, which was formerly the most popular OS on the platform, with most expecting that this lead will continue to grow as more users take advantage of Microsoft's free upgrade to Windows 10.

This month we also see OSX and Linux market shares grow, though the majority of Steam users remain on the Windows Platform. 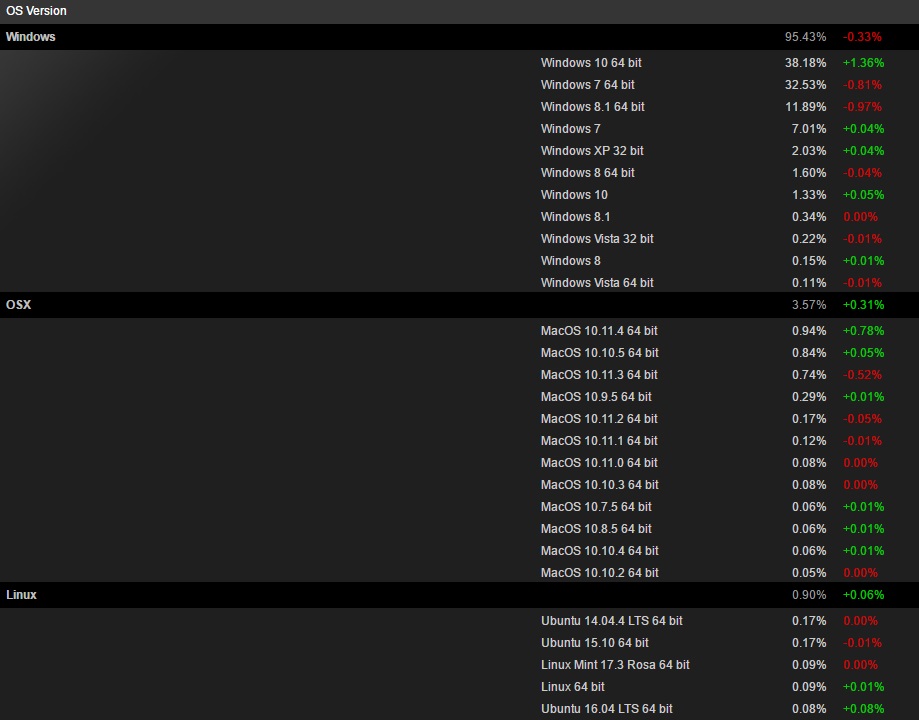 With such widespread adoption already there is no doubt that the new OS will continue to grow in popularity for PC gamers, especially as more DirectX 12 games launch over the next few months. This month alone both Total War: Warhammer and Forza Motorsport 6: Apex will be launching on PC with DirectX 12 support.

With over a third of Steam users using Windows 10, building games with DirectX 12 in mind looks like an increasingly attractive option for developers. So far Windows 10 has increased its market share on steam each month consistently, so it is expected that Windows 10 may even be able to increase their market share to perhaps 40-45% market share in time for the OS' 1 year anniversary.

One other noteworthy statistic from the hardware survey is the dominance of Nvidia GPUs, with Nvidia holding 56.58% market share on Steam and AMD/ATI holding a mere 25.36%, which is less than half of Nvidia's share. Intel Integrated GPUs hold 17.68% of the market.

You can join the discussion on Window's 10 becoming the most popular OS on Steam on the OC3D Forums.

Almost 40% of all Steam users are using the Windows 10.https://t.co/vPi3BtjZOF pic.twitter.com/dsG9WNDQ3D