Ageia: PhysX past, present and Future 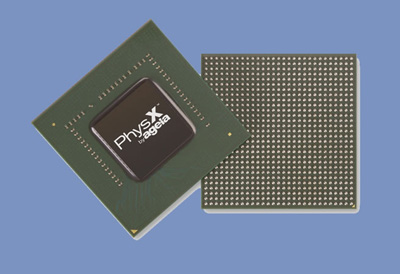 Upon launching it's PhysX processors and API, there was much bemusement sent in Ageia's direction. "What do we need a card that does physics for?" was the question most asked of Ageia.

Ageia's initial showings were actually pretty impressive and in my opinion, showed a lot of potential. However, subsequent lack of software (games) actually released for PhysX really started to make even the most optimistic of us doubt what could be done with PhysX. Cell Factor Revolution was released to a dubious press and the verdict was pretty down on the game, despite it being a free offering.

The present and the future for Ageia

Dan Forster and Michael Steele made us an appointment to have a chat about what Ageia is releasing now and what feels it can do in the future. I'm just going to briefly talk you through their demonstration and telll you what they said....and what I think about Ageia's future as of now.

The first demonstration we were talked through was GRAW 2. Using a rather nice Dell XPS laptop and a docking station with a PhysX card modded into it the demo began.

The first things we noticed were that the tress got destroyed and cut down by gunfire and that individual coconuts Could be shot off to fall and break in half on the floor. Explosive barrels exploded with a ferocity and realism that was pretty cool and building reacted with a "weight" that was missing in Cell factor. 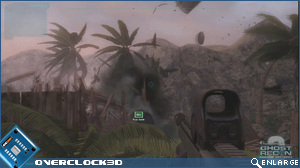 Not only were the impressive explosions present and correct but the little things were were there. The leaves flowed along the ground with the simulated wind (though strangely out to sea) and when you hit a fence the individual breaks appeared where you'd shot at the boards, not in a pre-determined scripted place. If you shoot the support beams then the whole fence falls down, as it should do.

What really peaked my interest was when we were shown where PhysX could really change gameplay. We came upon a fence that seemed impassable and would usually have been in most games. After some furious shooting and grenade launching we shot through the fence and continued on our way. An interesting debate that came up was could the enemy AI know to shoot through the fence "yes and it's pretty interesting as the physics actually start giving the CPU more work to do as the AI calculates the alternate paths". After seeing this in action it's a great gameplay element as the enemy soldiers walk through a path where a hut previously was and start shooting you after they sneaked a peak of you through a broken fence. 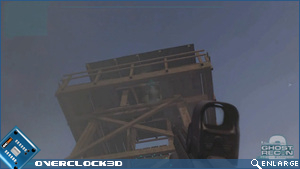 Another thing that was pretty good was when we sneaked up on the enemy in a sniper tower and unloaded through the floor. Breaking up the floor the sniper fell out of the tower, having more than a slight headache upon impact with the floor.

All pretty good and fun, but what else is new?

Unreal Tournament 3 and the UT3 Engine

Michael and Dan were keen to chat about the UT3 Engine, and no wonder. UT3 is set to be a big hit on the gaming scene, being one of the most anticipated games in recent years along with Crysis.

First of all we were shown an Alpha version of Warmonger, based on the UT3 engine and running the PhysX API on PhysX hardware. Although very much in the development stage this was an impressive demonstration to say the least. Shooting bricks on the buildings made them fall off individually, although Michael asked us to remember "the game is very early Alpha so we're expecting this to be even more detailed". He also went on to say that all of the buildings as far as you could see in the game were totally destroyable all the way down to the frames. Michael and Dan demonstrated how you could forge new paths amongst the rubble and after making himself comfy at the top of the stairs in a sniping position, Michael showed us how blowing out the stairs would stop you being approachable from attacks from behind. Interesting indeed. 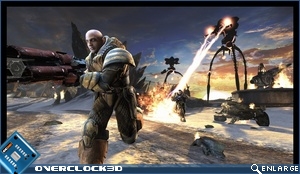 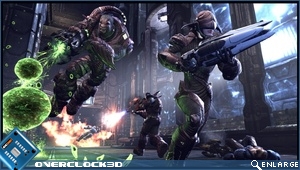 As far as UT3 was concerned we checked that PhysX wouldn't be essential for the game and were assured that it wouldn't but there may be extra content available for those with PhysX cards. Michael stressed that although Ageia was a hardware company, their API is free to use and indeed games such as Gears of War and Bioshock were using the software in ways that would be pretty impressive without the hardware. With literally hundreds of games using the license for UT3, Ageia are hoping that UT3 becomes the hit game that launches PhysX and it's a very good bet that it will help the company sell more of it's hardware.

Can others do better?

As someone who wants to believe in PhysX, this is pretty good news. However after some big hitters such as Intel, ATI, nVidia and Crytek have come out saying that we just don't need it it's hard to believe that it will be an essential. In response to this the guys from Ageia said "when we launched it was a case of us showing what the card could do without a whole lot of software...now I think we've proved that Physics is something that's going to happen in gaming and we've really got something cool to show people". Going on to talk about what others have done, Michael said "we have shown what we (Ageia) can do, now it's their (ATI, Crytek et al) turn to back up their claims and show what they can do". Personally I think Michael has a point, although I have seen some pretty nice ATI Physics demo's I have never seen the level of phyics simulations shown in-game by Ageia.

The message from Ageia is a strong "Prove it".

Crysis is on it's way so we'll see what happens then, certainly something both of Ageia's representatives are looking forward to by the sound of it.

Coming back on to PhysX, we asked about what is happening on the hardware side of things. After stating that the current hardware "has a lot of headroom in it", they went on to say "a next-gen design is on it's way", although this is looking towards the middle of next year. Dan and Michael couldn't talk too much of what the future could offer hardware-wise, but talked about was laptop integration so its obvious Ageia are thinking of what's next.

SDK and "other cool stuff"

As a final part of the large amount we discussed with Ageia we were reminded not to forget that there is about 10 000 sign-ups for the PhysX SDK and "there's a lot of interesting development going on out there". Particularly focused on was a pretty cool demonstration of tackling in rugby (or American football, depending on your side of the pond) where PhysX was put inside the limb joints to demonstrate how this could be calculated in real-time with PhysX. Microsoft's robot laboratory were amongst the names mentioned and there are many more projects such as the SIMNOS project.

All in all it was a positive experience talking to Ageia and although it's obvious that their API has a long way to go until it is industry standard, it's certainly got a strong case for it from what we saw.

PhysX turn your cogs? Think we can do without it? Discuss here 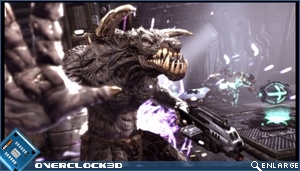 Toxcity
It is a good idea for the future. But the only thing I don't like about it is when I will soon have to buy another piece of expensive hardware to run the eye-candy.

We shall see what happens.

FarFarAway
The good thing is that the PhysX API can do some of the cool stuff without the hardware, just you get the biggest benefit from it with the hardwareQuote

ionicle
they need to make a deal with Nvidia and ATi, and get these things integrated into graphics cards in general, the extra expense imo just isnt worth it......Quote

FarFarAway
Don't knock it till you've tried it in a decent game that uses it. It's all about waiting to see where they go with itQuote

glocktodahead
I think it looks pretty cool. I haven't personally been able to test one out, but more rubble, better explosions and more destruction seems cool to me. I like the idea of being able to blow a staircase to block enemies from coming behind. Hopefully we'll get to see a few more games take advantage of the advanced physics.Quote
Reply